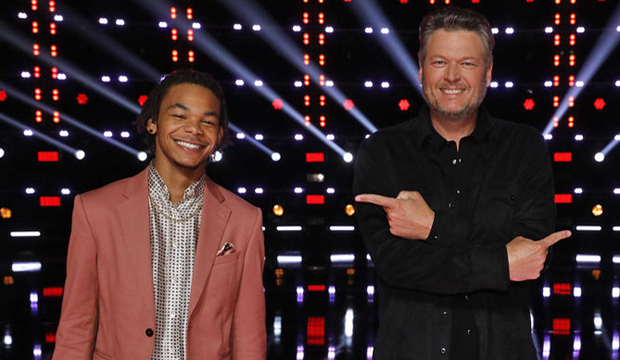 As the only coach who’s been with “The Voice” since day one, Blake Shelton understandably has more victories than anyone else. But that still doesn’t take away from the fact that he just won his 8th championship out of 20 seasons thanks to Cam Anthony. (See “The Voice” winners list.)

During the Monday night performance show, host Carson Daly celebrated Blake’s 10-year anniversary by showing old clips and new interviews with some of his most successful artists of all time. Blake’s girlfriend Gwen Stefani introduced the video package (watch below). When the trio of rival coaches balked that it was “propaganda” for Blake since voting was still going on, Carson responded that they’ll each get that special treatment once they make it 10 years on NBC’s reality TV show.

Blake may have lost the inaugural Season 1 title to Adam Levine‘s artist Javier Colon, but the country coach quickly rebounded by winning three in a row: Jermaine Paul (Season 2), Cassadee Pope (Season 3) and Danielle Bradbery (Season 4). His next victories were with Craig Wayne Boyd (Season 7), Sundance Head (Season 11) and Chloe Kohanski (Season 13). Blake then had a four-season losing streak that was finally broken in 2020 with Todd Tilghman (Season 18). He lost the 19th season to his girlfriend Gwen and her teen artist Carter Rubin, but rebounded in Season 20 with Cam Anthony.

Here’s the list of Blake Shelton’s eight winning artists on “The Voice.” Which one is your favorite?