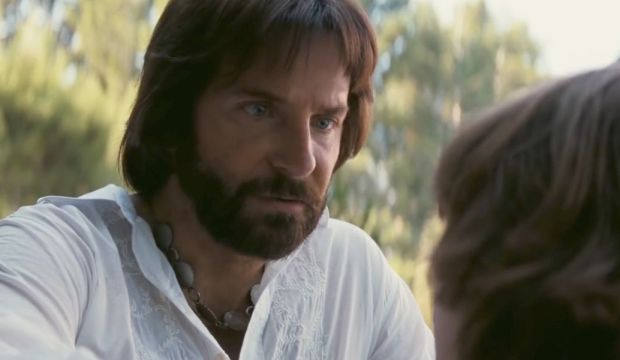 Paul Thomas Anderson’s “Licorice Pizza” is well into its running time when Bradley Cooper literally stomps into the frame and promptly takes over the entire movie. Playing Jon Peters, the Hollywood producer best known at the time for his relationship with Barbra Streisand, Cooper comes in hot and only gets more manic as his scenes progress.

“Do you know how I am?” a wired Cooper as Peters asks a stunned Gary (newcomer Cooper Hoffman) as the youngster is set to deliver a waterbed to Peters’ home. “Do you know who my girlfriend is?” When Gary says he does, it sets off a quick and hilarious back and forth reminiscent of “Who’s on first?” or the “would that it were so simple” scene from “Hail Caesar!” Unfortunately for Gary and his friend Alana (fellow newcomer Alana Haim), things only get more fraught from there. (Watch the beginning of Cooper’s first scene exclusively below.)

“I had met Bradley a handful of times and had been an admirer of his work – ‘American Sniper’ in particular, which I thought was an incredibly dynamic and truthful and scary performance. As I was writing this part, it occurred to me that with the right beard and haircut, he would be great in this,” Anderson previously told Vanity Fair in an interview.

“Licorice Pizza” includes a number of famous faces, including Cooper, Sean Penn, Tom Waits, and Benny Safdie. But the film is built on the strength of its two lead performances from Hoffman, the son of the late Philip Seymour Hoffman, and Haim, who is part of the rock group Haim with her sisters. The two stars are first-time feature film actors – and the scene with Cooper was their introduction to film production. As Anderson previously explained, it was Hoffman and Haim’s first day on a movie set ever.

Cooper, Anderson said to Vanity Fair, “felt that energy and took this ball and ran with it, much to my encouragement, like, ‘This is their first day on a movie set. I’m expecting you to show them what it means to play make-believe and to play it with ferociousness and joy. It was as if he sprayed lighter fluid all over the set and then just struck this match and said, Watch this. You can feel in the performance and the energy just how unhinged he is. But, by the way, to be that unhinged takes an incredible amount of skill and control, you know? You can’t just come on and be a wild man.”

According to Haim, the challenge of acting opposite a performer as talented as Cooper in his peak form connected her and Hoffman at a critical moment in the process. “The energy coming off of Bradley Cooper playing Jon Peters was insane. He fully was in it, and never broke, and it really did bond me and Cooper together, like, ‘OK, so we have this obstacle in front of us, which is Bradley Cooper playing Jon Peters. Like, this is our obstacle,’” Haim told RogerEbert.com. “And he would look at me and be like, ‘Am I doing OK?’ I would say like, ‘Yeah, you’re doing great.’ In my mind, I’m like, ‘I have no idea. I’m not sure. But of course, you are. Like, I think you are.’”

Cooper is an eight-time Oscar nominee as an actor and producer, with three Best Actor nominations (“Silver Linings Playbook,” “American Sniper,” and “A Star Is Born”) and a nomination in the Best Supporting Actor category for “American Hustle.” He’s in the thick of the awards race again this year for both his supporting performance in “Licorice Pizza” and his lead work in “Nightmare Alley.”