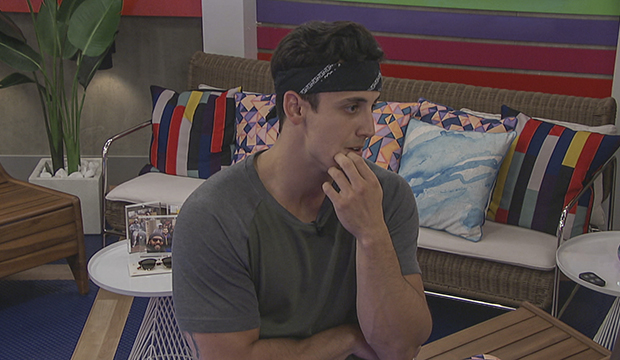 The house was unanimous on Thursday’s live eviction episode of “Big Brother,” sending Brent Champagne out the door by a vote of 11-0 over Britini D’Angelo. The 28-year-old flight attendant from Rhode Island was expecting to blindside Head of Household Xavier Prather by securing enough votes to stay, but even Brent’s fellow Aces (Hannah Chaddha, Whitney Williams and Derek Xiao) turned on him.

“To be honest, I’m not shocked,” Brent told host Julie Chen Moonves during his exit interview. “It’s the right play. If [they didn’t] get me out I was going to create a lot of havoc in the house. It is a game of betrayal. I’ve had a target on my back since day one. I’m a strong personality. Obviously physically, people have said since day one I look like a threat. Those things just don’t go away. I haven’t even done anything to prove I’m a physical threat yet. I’ve thrown up. I’ve done a couple of memory comps, but that was it. For people to keep saying that I was an amazing competitor before I got to really compete was just an easy way of putting a target on my back.”

Although Brent seemed certain he had enough votes to stay throughout the week, he told Julie he wasn’t surprised his own Aces teammates voted against him. “Derek X. has already done it. Whitney and my personality don’t get along. I’m not really shocked, but at the same time, when you’re doing something [as a] cohesive group it’s better to go with the herd than against it.” When Julie asked for further clarification about Derek X. betraying Brent before, he responded, “He was plotting against me Day 2 with Travis [Long] and Kyland [Young]. And I was on his team! I was 25 percent of his success as far as HOH was concerned. If I won, he won. So it was mindboggling to know that right out the gate he was given an alliance of three extra people and he was willing to go against that to build bonds with people that weren’t even on his own team.”

When asked why he lobbied for the Veto not to be used by Christian Birkenberger this week, Brent stood by his decision. “I needed the numbers,” he explained. “I needed to know where people stood in the house. As far as winning a Veto, yeah that would save me one more week, but then I’d be gone. My thought process was to get the information and use that because me taking myself off with the Veto would give me nothing besides one more week of safety. I’ve already been targeted by a lot of people in the house before, so it wasn’t going to change.”

So what does Brent have to say about his “gut that is never wrong” now? “My gut felt safe as far as the team aspect of the game,” he revealed. “If there was a physical comp, I would be able to help grant you safety. Logically, you would want to keep a piece that granted you safety without you really have to do anything. So if they’re willing to throw away that, as far as the team aspect is concerned, that’s on my team.”

Finally, Brent said his Mafia alliance was a “last ditch effort” and he wasn’t surprised to be betrayed by Kyland. Preceding Brent’s Day 23 eviction were Brandon “Frenchie” French on Day 16 and Travis Long on Day 9. Christian was named the new HOH at the conclusion of Thursday’s episode, guaranteeing safety for himself and his fellow Kings teammates Alyssa Lopez, Sarah Beth Steagall and Xavier. The next wildcard competition and nomination ceremony will air Sunday, August 1 on CBS.