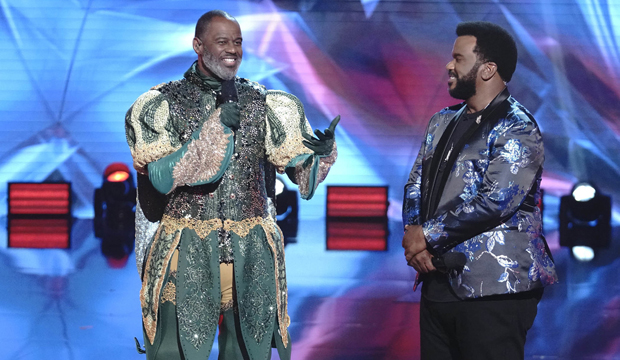 Paula Abdul outsmarted her fellow panelists on Wednesday’s episode of “The Masked Dancer,” correctly guessing 16-time Grammy winner and R&B legend Brian McKnight was dancing behind the Cricket mask. The Cricket was eliminated in the Group A playoffs, failing to advance to the Super Six after his “This is How We Do It” dance.

With a voice like Brian’s, everyone was curious why he would choose to be on “The Masked Dancer” rather than “The Masked Singer.” “The way I sound, you’d probably be able to pick me,” the crooner explained in his unmasked interview with host Craig Robinson. “With this, even though those were the most obvious clues on planet Earth, it was fun because nobody knew it was me. Except Paula. Being anonymous was great because I don’t dance.” As for those “90210” clues that had the panelists guessing Ian Ziering after his prior performance? Brian was on the soundtrack of the hit TV show and even made a cameo appearance.

Although Paula was able to properly decipher the clues, the other panelists were way off the mark. Ashley Tisdale thought the Cricket was actor Ashton Kutcher. Ken Jeong was convinced he was Olympic swimmer Michael Phelps. And Brian Austin Green was joined by guest panelist Rob Lowe in guessing the Cricket was another Olympic swimmer, Ryan Lochte.

Despite only Paula guessing the Cricket’s identity, there were plenty of hints in the clue packages pointing them towards Brian. The bombs in Cricket’s package were a hint to Brian’s song “You Got the Bomb” from his best-selling album “Anytime.” The knight was in reference to Brian’s last name, McKnight. The numbers 19 and 98 were a clue to the year 1998 when Brian released his first album with Motown Records. The dancers’ clock masks were indeed a reference to Brian’s hit song “Back at One.”

Brian was the fourth dancer to be unmasked this season, preceded by Ice-T as the Disco Ball, Bill Nye as the Ice Cube and Elizabeth Smart as the Moth. And although the Cricket has been squashed, the battle for the Diamond Mask trophy is just heating up. Group A’s Exotic Bird, Hammerhead and Tulip will join Group B’s Cotton Candy, Sloth and Zebra in the Super Six. Did you guess Brian was dancing behind the Cricket mask?