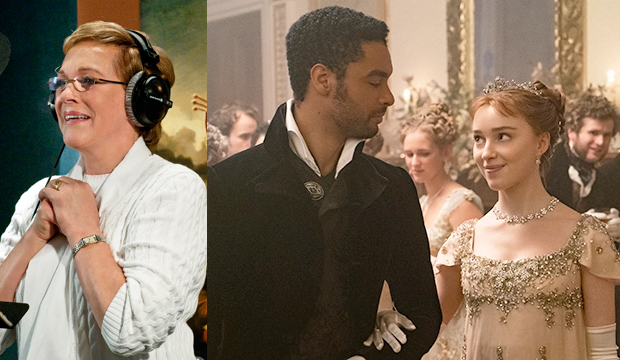 “Bridgerton” boasts one of the biggest casts on television, and now 22 of them are in contention for the 2021 Emmys (see below).

The lengthy Emmy ballots were officially distributed to all Television Academy members on June 17, with instructions to mark as many contenders as they wish in the acting categories. In other words, if voters think all 22 “Bridgerton” peeps are worthy of nominations, they can check off every single one of them. Acting legend Julie Andrews is eligible for her Best Character Voice-Over Performance of Lady Whistledown, while leads Rege-Jean Page and Phoebe Dynevor contend in Best Drama Actor and Actress, respectively.

Netflix’s period drama is based on Julia Quinn‘s popular novels and tells the story of London’s high society days of 1813, when young debutantes are presented for courting. Page takes on the role of Simon Basset, the Duke of Hastings, who quickly becomes a love interest for Dynevor’s young socialite character, Daphne Bassett. As one of the most talked-about shows of the year, “Bridgerton” is expected to rake in a ton of noms thanks to its flamboyant costumes, glorious sets, big hairdos, etc. It’s also one of Gold Derby’s top three picks to win Best Drama Series.

Heading into this Emmy season, Page has already been recognized for his buzzy role at the Screen Actors Guild Awards (individual performance and ensemble cast). The British thespian also took home trophies at the Image Awards (Best Drama Actor) and MTV Movie & TV Awards (Breakthrough Performance). Will any of his co-stars now earn their time in the awards spotlight?

SEE Nicola Coughlan (‘Bridgerton’) on playing Penelope: She ‘played with fire’ and ‘wasn’t ready for the consequences’ [EXCLUSIVE VIDEO INTERVIEW]

Here’s a closer look at all 22 “Bridgerton” cast members submitted on the 2021 Emmy ballot: