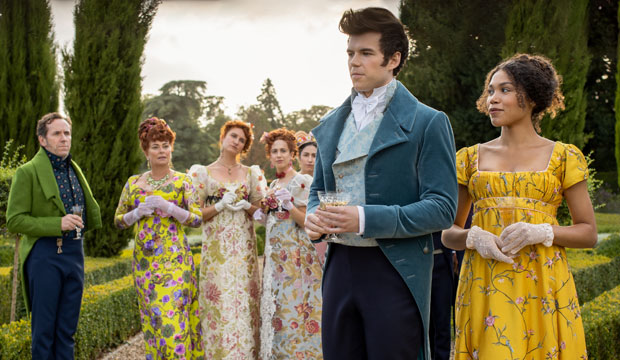 “The Crown” has dominated this awards season, winning Best Drama Series at the Golden Globe, Critics Choice and Producers Guild Awards. Now it has the most nominations going into April 4’s Screen Actors Guild Awards. So it’s guaranteed to win the top prize for its ensemble cast, right? Not necessarily. Though “The Crown” is the heavy favorite, we need to keep a close eye on “Bridgerton.”

SAG is decided by around 160,000 industry professionals who make up the SAG-AFTRA union, and with that many members their winners tend to be more populist than other industry groups. They’ve often given their top drama ensemble prize to big ratings hits like “ER,” “CSI,” “Grey’s Anatomy,” “Lost,” “Downton Abbey” and “This is Us.” Ratings don’t mean what they used to, especially in the age of streaming, but the victory for the watercooler streaming hit “Stranger Things” in 2017 showed that buzzy online shows can win too.

SEESAG Awards nominee profile: Regé-Jean Page (‘Bridgerton’) is looking to duke it out for the win on his first try

In comes “Bridgerton,” which premiered on Christmas and ranked among Netflix’s self-reported top 10 programs for weeks. It’s a soapy Shonda Rhimes-produced show like aforementioned past champ “Grey’s Anatomy,” it has a big cast of characters navigating British society like “Downton Abbey,” and it has generated tons of media chatter like “Stranger Things.”

Granted, “The Crown” has generated plenty of its own buzz with its fourth season introducing Princess Diana (played by Emma Corrin) and Margaret Thatcher (played by Gillian Anderson). And it’s the defending champion in the drama ensemble category. Considering all that plus its four individual acting nominations makes the show hard to deny, which is probably why it has such an overwhelming lead in our odds, which are based on the combined predictions of Gold Derby users. But history shows that “Bridgerton” is exactly the kind of show that could upset.