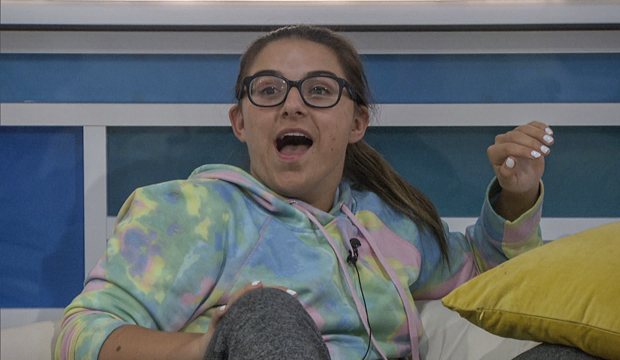 After spending four of the last six weeks on the block, Britini D’Angelo was finally evicted from the “Big Brother” house on Thursday’s live episode. The 24-year old kindergarten teacher from Niagara Falls was targeted by Head of Household Kyland Young and then ousted by a vote of 7-1 over her former Jokers teammate Derek Frazier. Azah Awasum was the only houseguest who voted for Britini to stay. Britini will become the first houseguest to move into the jury house and vote for the Season 23 winner at the September live finale.

“I think going into jury it’s definitely a conversation of who you think you can beat in the final two,” Britini told host Julie Chen Moonves in her exit interview. “I think it was the consensus of the house that with the underdog story that I have, no one in this house was going to beat me in the final two. I was going to have a really great story if I made it to the end and they wanted to get me out while they could.”

But did Britini know she was seen as such a threat? “People [were] telling me today that I could beat them in the final two,” she admitted. “I knew how hard that I had to fight in this house and I knew my story was so different than everyone else’s. I spent 22 out of 44 days on the block. That’s an insane number to me but honestly I’m honored.”

The house may have wanted Britini gone, but America had other hopes. Britini was among the top tier of vote-getters (along with Derek F. and Derek Xiao) who got $100 worth of “BB Bucks” to play in the High Rollers room. She neglected to spend a dime when she had the chance. Was that a mistake? “I knew that I wanted to save my ‘BB Bucks’ for the roulette wheel,” she explained. “I genuinely thought that I was okay with the deal that Kyland had made me, but now we all know Kyland’s a liar and doesn’t do deals correctly. The whole house knows, America knows, everyone knows. But I genuinely thought I was okay which is why I didn’t use it and wanted to save it.”

What was the best thing about Britini’s time in the “Big Brother” house? “The fact that I’m here,” she said. “This is unheard of for someone like me to be sitting with you. This is insane for me!” Following Britini’s eviction, Sarah Beth Steagall won the “Dash to Dinner” competition to claim the first HOH victory by a female this season. Prior to Britini’s Day 44 eviction, she was preceded by Christian Birkenberger on Day 37, Whitney Williams on Day 30, Brent Champagne on Day 23, Brandon “Frenchie” French on Day 16 and Travis Long on Day 9. Sarah Beth will nominate two more players for eviction on Sunday, August 22 on CBS.