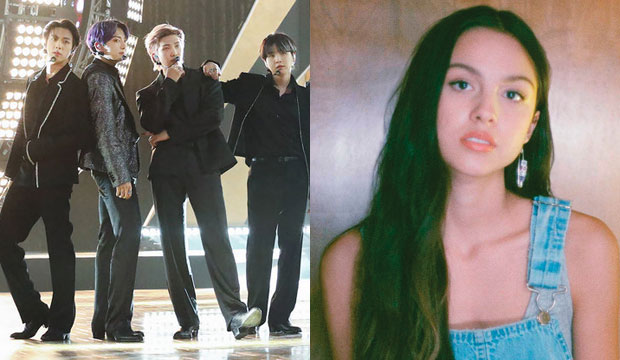 BTS ruled the Billboard Hot 100 with their second English-language single “Butter,” but then after seven weeks on top it was replaced by BTS’s third English-language single, “Permission to Dance.” On the chart dated July 31, however, “Butter” climbed back into the top spot for an eighth week, tying Olivia Rodrigo‘s “Drivers License” as the longest-running chart-topper of the year (so far). But which viral hit do you think is better? Scroll down to vote in our poll at the bottom of this post.

SEEWill BTS ‘Butter’ up the Grammys after ‘Dynamite’ was snubbed for Record of the Year?

Before this year Rodrigo was mostly known as a child star from the Disney shows “Bizaardvark” and “High School Musical: The Musical: The Series.” But her career exploded with the release of “Drivers License,” her heartbreak ballad that debuted at number-one and stayed there for two months. Her romp continued with another top-10 single (“Deja Vu”) and then another number-one hit (“Good 4 U”).

“Good 4 U” has since been locked in close combat with “Butter.” After debuting in the top spot, “Good 4 U” was knocked out by the Korean boy band’s smooth single and has been stuck at number-two behind them ever since. Even when BTS replaced themselves at number-one for two weeks in a row (“Butter” to “Permission” and back to “Butter”), Rodrigo was there in the runner-up spot.

SEEWill Olivia Rodrigo sweep the Grammys in 2022 like Billie Eilish did in 2020?

But “Butter” wasn’t BTS’s breakthrough on the chart like “Drivers License” was for Rodrigo. It was actually their fourth number-one hit in less than a year, following “Dynamite,” “Savage Love” (with Jawsh 685 and Jason Derulo), and “Life Goes On.” However, “Butter” is their longest-running chart-topper to date, thanks in part to instrumental and remix versions that contributed to the song’s sales and streams.

But in our Grammy odds for Record of the Year and Song of the Year, “Drivers License” still has the edge based on the combined predictions of Gold Derby users. “Butter” has yet to crack the top eight in either category in our odds, which either means we’re drastically underestimating the song or the recording academy really just won’t go for it. But the Grammys will get to decide later. For now, you get to sound off by voting below.