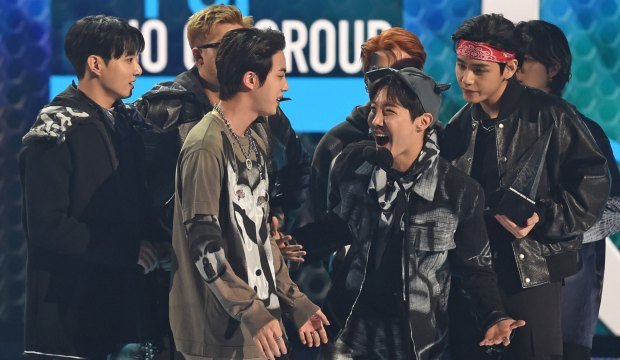 BTS were the big winners at the 2021 American Music Awards, prevailing in all three of their categories: Favorite Pop Duo or Group, Favorite Pop Song for “Butter,” and Artist of the Year. In the top category, they defeated Taylor Swift, who had won that award six times before, including the last three in a row. In fact, this is only the second time Swift has ever lost when nominated. She was previously defeated by One Direction in 2015. Check out the complete list of winners here.

But don’t feel too bad, Swifties. Taylor still won twice at these fan-voted kudos: Favorite Female Pop Artist and Favorite Pop Album for “Evermore.” Those were her 33rd and 34th career victories, extending her record as the most honored artist in AMAs history.

A couple of artists tied BTS on top of the winners tally with three prizes. One was Megan Thee Stallion, who claimed Favorite Female Hip-Hop Artist and Favorite Hip-Hop Album for “Good News” (beating Drake‘s recent chart-topper “Certified Lover Boy“). Then she also took Favorite Trending Song for “Body” (overtaking Olivia Rodrigo‘s “Drivers License”), showing that her hotties were out in force. Doja Cat was also a triple champ, claiming Favorite Female R&B Artist, Favorite R&B Album for “Planet Her,” and Collaboration of the Year for “Kiss Me More” featuring SZA.

The aforementioned Rodrigo had the most nominations this year (seven), but while she didn’t carry an armful of trophies out of the building, her fans did get her a big one: New Artist of the Year. What did you think of this year’s winners? Was anyone robbed of recognition?