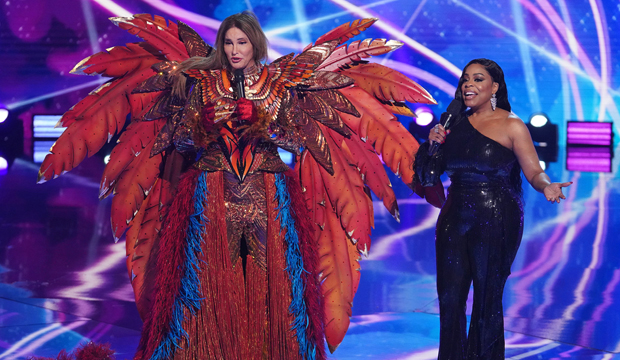 Group B took the stage for the first time during Wednesday night’s episode of “The Masked Singer,” with the Phoenix becoming the first famous face forced to unmask in front of America. Despite sashaying out in full costume and belting out “Tik Tok” by Kesha, the fierce, feathered creature could not hide her true identity from panelists Ken Jeong and Jenny McCarthy. Both correctly named Olympic gold medalist and reality TV star Caitlyn Jenner as the mysterious celebrity behind the Phoenix mask.

And even though Ken changed his final guess from Caitlyn to RuPaul at the last second, he still gets credit for his first impression guess. The funny doctor and Jenny are now tied at one point each in this season’s race for the Golden Ear trophy.

“Ken, you’ve always been an idiot!” Caitlyn exclaimed during her unmasked interview with host Niecy Nash. “What are we going to do with you?” Asked why she chose to do “The Masked Singer,” Caitlyn responded, “I like challenges! I race cars. I fly airplanes. It keeps you going! So for me it was fun. You can only work on the golf game for so long.” And what does she believe all her famous kids will think? “They’ve always known dad’s a little crazy! Life’s short. You’ve got to enjoy it.”

While Ken and Jenny knew exactly who was singing behind the Phoenix mask, their co-panelists Robin Thicke and Nicole Scherzinger weren’t so sure. Robin thought it was another icon in the LGBTQ+ community, “Orange is the New Black” star Laverne Cox. Nicole thought Phoenix was the Emmy-winning host of “Queer Eye,” Jonathan Van Ness.

Despite their incorrect guesses, there were plenty of hints in the Phoenix’s clue package pointing the panelists to Caitlyn. She revealed that despite gracing the cover of hundreds of magazines, she’s been hiding behind a mask most of her life. There was mention that millions once saw her as a superhero (as the 1976 Olympic gold medalist) and it was also revealed that she has numerous children.

Caitlyn was outshined in her Group B performance by Black Swan, Chameleon, Grandpa Monster and Piglet. Her elimination was preceded by Kermit the Frog as the Snail in the Group A premiere last week. Did you guess Caitlyn was hiding behind the Phoenix mask?