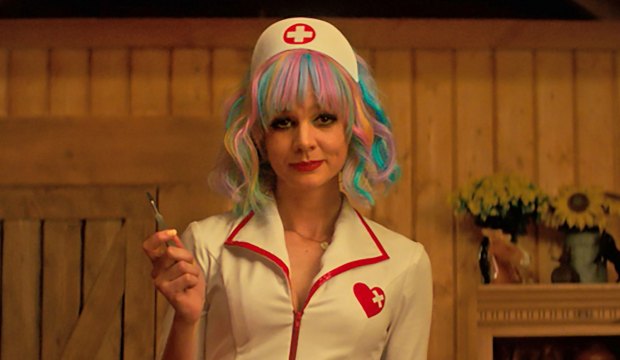 Emerald Fennell, the British writer/director of the acclaimed revenge thriller “Promising Young Woman,” has a most unusual way of penning a script. Fennell, who is an Emmy nominated executive producer and writer of BBC America’s “Killing Eve,” doesn’t write anything down until she’s completed the entire script in her head. “So, it usually takes a couple of years to finish it completely and then I’ll write it down,” said Fennell in a recent Film Independent zoom conversation with star Carey Mulligan moderated by the organization’s president Josh Welsh.

Mulligan plays Cassie, a once promising young woman who was attending medical school when her BBF and budding doctor Nina was raped by one of her classmates while others watched the crime. The school did nothing. Cassie dropped out of school to take care of Nina, only to have her friend commit suicide. Now living at home with her clueless parents and working in a coffee bar, Cassie, who dresses like an extra in a 1990’s Britney Spears’ music video, seeks to avenge her friend’s death.

Richard Roeper wrote in the Chicago-Sun Times that the film is a “smart, provocative, pitch-black dark comedy and revenge movie with an astonishingly powerful, deeply layered performance by Carey Mulligan as Cassie, who exacts instant, vigilante justice on the predatory creeps who try to take advantage of her when she’s pretending to be highly intoxicated. It’s a #MeToo fantasy of sorts, with the anti-heroine methodically destroying the lives of the men who try to wrong her in present day.”

Fennell, who is also an actress (she portrays Camilla Parker-Bowles on “The Crown”), had been thinking a lot about the culture she grew up in: “the use of alcohol in hookup culture, the sort of things that had been completely normalized that were actually incredibly abusive.” “The sort of things that were jokes in movies and TV shows that weren’t really funny,” she noted. “What happens for me is it will start with a scene. So, the scene that this started from was drunk girl lying on a bed, somebody undresses her, and she drunkenly says what are you doing? And then sitting up, stone cold sober and saying, ‘What are you doing?’ The moment I thought, ‘Ok, I think I knew what this movie is about, and I think I have an idea who this woman is.”’

Mulligan had crossed paths with Fennell as an actress years ago when they did an episode of the British series “Trial & Retribution: Sins of the Father” but neither had a recollection of that. It was a mutual friend who invited both of them to her house for a meet and greet. “It was sort of a little bit of a set up,” said Mulligan, who won a BAFTA and earned an Oscar and Golden Globe nomination for 2009’s “An Education.” They didn’t talk about the script at the meeting. “Emerald was on her way to the Killing Eve’ wrap party. I remember thinking she was very cool, and I wanted to be her best friend.”

Then a few weeks later Mulligan received the script and was blown away. “I wanted to meet Emerald as soon as I could properly, now knowing there was a possibility of a job.” Fennell sent her a Spotify playlist of the songs that are used in the film’s soundtrack most notably two different versions of Spears “Toxic.” ” was starting to get a sense of the tone of the writing and was just so excited,” said Mulligan.

The soundtrack, which runs the gamut from Paris Hilton’s “Stars Are Blind” to the Rodgers and Hammerstein classic “Something Wonderful” from “The King and I,” was “really specifically important for this film,” said Fennell.  “I think the music in this movie is the kind of music that’s often not treated seriously in the way that I think manicures aren’t taken very seriously and clothes aren’t taken seriously. Things I think traditionally young women are sort of disparaged [for] or thought of not being serious.”

Cassie, Fennell explained, is a meticulous person who is expert in hiding her grief “in plain sight, so expert at using her femininity to disguise deep rage and grief,” said Fennell. “So, it felt like [the movie] needed to look and sound innocuous, seemingly soft and inviting and pleasurable and then maybe something more complicated.”

Though Cassie keeps telling herself she is seeking revenge for Nina, “I think she wants people to ask for forgiveness, but she’s really looking for forgiveness herself,” said Mulligan. “She feels responsible and can’t let it go.” She and Fennell had “loads” of conversations about what that “friendship is when you’re growing up together and have all the same references and love all the same things,” noted Mulligan. “You know the person better than anyone in the world.” As well, as just trying to “establish a really clear story in our minds, much of which is not ever talked about in the film, but it gave us a reference point for pretty much every scene.”