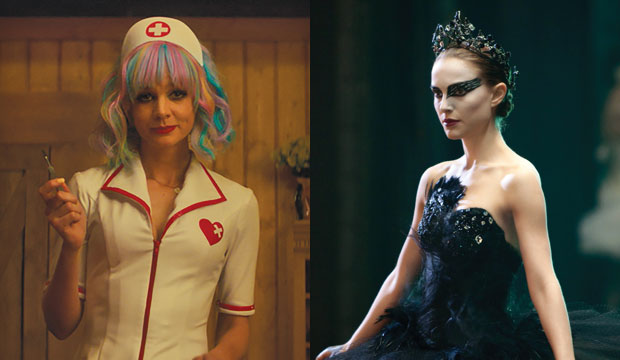 Carey Mulligan is emerging as a possible favorite to win her first Oscar for “Promising Young Woman.” She has already scored Best Actress bids from the Golden Globes and the Screen Actors Guild Awards, so she is well on her way to nabbing her second Oscar nomination in March. Mulligan was first nominated at the Academy Awards in 2010 at the age of 24 for “An Education,” a huge breakthrough for the actress that led to numerous starring roles over the last decade. Now back in major awards contention again, Mulligan might have a path to victory along the lines of another actress that voters discovered at a young age: Natalie Portman.

While the “Star Wars” prequels had already made Portman a well-known actress before “Closer,” she was only 23 when she received an Oscar nomination for that 2004 film. It would be another six years before Portman would earn a follow-up nomination, this time for the dark thriller “Black Swan.” She swept the awards season with her performance as psychologically damaged ballerina Nina Sayers. With its disturbing imagery and horror elements, it was far from typical academy fare, especially in a Best Actress category that tends to favor biopics and traditional dramas. Yet “Black Swan” became one of the most buzzed-about films of 2010, thanks in part to Portman showing a side of her we hadn’t seen much in her previous performances.

The same could be said for Mulligan, who has spent the better part of the 2010s in period dramas such as “The Great Gatsby,” “Suffragette” and “Far from the Madding Crowd.” Flash forward to 2020 and “Promising Young Woman” finds her in a mode that, as with Portman, few mainstream audiences have seen her in before. In the film, Mulligan plays Cassie, a woman who dropped out of med school after a traumatic incident and now seeks vengeance on predatory men. Mulligan gets to show her full range as an actress as she portrays Cassie’s justified anger, skillful manipulation and wicked sense of humor. Even those who weren’t as keen on the film as a whole have praised Mulligan’s star performance.

The ultimate Best Actress lineup will probably not make it an easy road for Mulligan. Darker films like “Promising Young Woman” have also struggled at the Oscars in recent years, from “Nightcrawler” to “Gone Girl” to “Nocturnal Animals,” which all scored just one nomination apiece despite strong early buzz for a lot more. Yet Portman took down heavyweight competition a decade ago in an all-star lineup that included Annette Bening (“The Kids Are All Right”), Nicole Kidman (“Rabbit Hole”), Jennifer Lawrence (“Winter’s Bone”) and Michelle Williams (“Blue Valentine”). Most of those performances shared similarities with other Best Actress winners in Oscar history (characters dealing with grief, love, and family strife), but Portman swept the season anyway.

Unless she too sweeps the televised precursors with wins, Mulligan could face similarly tough competitors in the form of Viola Davis (“Ma Rainey’s Black Bottom”), Frances McDormand (“Nomadland”) and Vanessa Kirby (“Pieces of a Woman”) when it comes to the Oscars. But should Mulligan win at the Golden Globes and SAG (a strong possibility since “Promising” exceeded our expectations with its four Globe nominations), she might just be on the Portman path, with a “welcome to the club” bid followed by a gap and then a win on her second nomination. It may have taken 11 years for Mulligan to finally get back into the Oscar conversation, but like with Portman, sometimes the right role comes along at just the right time.