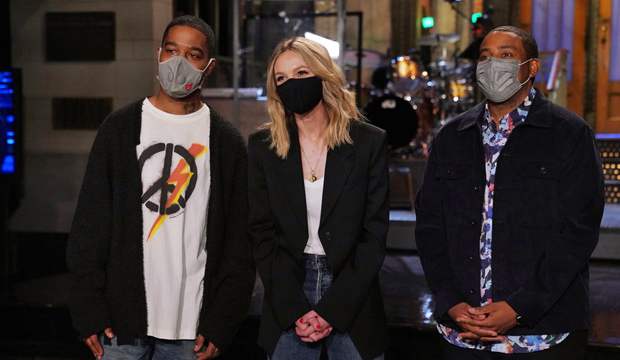 Carey Mulligan hosted the April 10 episode of “Saturday Night Live” with musical guest Kid Cudi. This was the actress’s first time hosting the NBC variety series. Like Daniel Kaluuya last week, Mulligan’s appearance is well-timed for impending Academy Awards voting, having just earned her second Oscar nomination for “Promising Young Woman.” For her debut “SNL” monologue, Mulligan spoke about American audiences often confusing her for Michelle Williams, saying she was “amazing” in such projects as “Brokeback Mountain” and “Fosse/Verdon.”

The actress then spoke about production stopping for a year during COVID, so she’s had to channel all her dramatic energy into spicing up her bedtime stories to her kids, from “recently divorced dragons” to “unicorns with secret pill habits.” As she continued to dish about her family, she got a surprise visit from her husband, Marcus Mumford, a.k.a. the lead singer of Mumford & Sons.

Mulligan is coming off a Best Actress win at the Critics Choice Awards, and while she’s lost to some of her Oscar competition at the Golden Globes and SAG Awards, the race is chaotic enough that she may just walk away with the trophy in the end. She first earned an Oscar nomination in 2010 for “An Education” and went on to star in such films as “Drive,” “Shame,” “The Great Gatsby,” “Mudbound” and “Wildlife.”