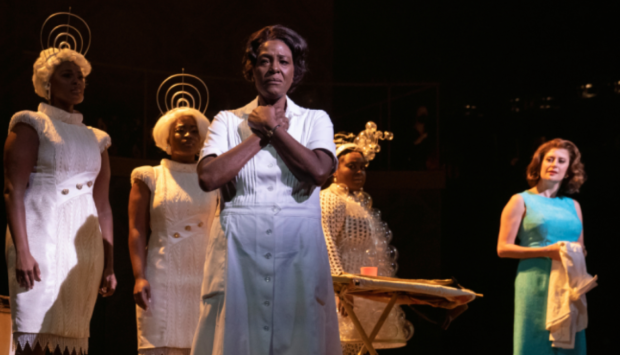 Seventeen years after its Broadway debut, musical “Caroline, or Change” has returned in what critics describe as an “electrifying” production. The show is set in 1960s Louisiana and centers on its title character Caroline Thibodeaux (Sharon D Clarke), who works for a Jewish family and cares for their son Noah, who inadvertently changes the course of her life with pocket change. This Roundabout Theatre Company production opened at Studio 54 on Oct. 27.

“Caroline, or Change” received rave reviews from critics. Jesse Green (New York Times) calls the production a Critic’s Pick and an “electrifying” revival. He writes that the book and score are “models of thematic concision, wonders of imagery, daring pileups of incompatible emotions,” and the musical as a whole “never less than thrilling to experience.” He saves his highest praise for star Clarke, who delivers a “titanic performance” “of tragic grandeur,” writing, “She makes of the maid an almost Shakespearean figure; even at the depths of her character’s despair, in the scarifying 11 o’clock number ‘Lot’s Wife,’ she commands attention without begging for it, and does not allow herself, because Caroline wouldn’t, the luxury of collapse.”

Ayanna Prescod (Variety) deems the musical “deeply meaningful, crucial to experience and definitely a necessary change.” She notes how Clarke embodies Caroline’s “misery” with “every grimace and puff of her cigarette, and in her stance with every hard flinch,” and she also credits many of the production’s featured players, including the three performers who “gorgeously” play Caroline’s radio – Harper Miles, Nya, and Nasia Thomas – as well as Samantha Williams, who “delicately conquers” the role of Caroline’s daughter Emmie “with a youthful energy and gentle grace.” Prescod also highlights Fly Davis’ “eye-catching set design.”

Helen Shaw (Vulture) celebrates “Caroline” as a “candidate for the century’s greatest piece of musical theater,” which is “grand and thrilling and crammed with gorgeous music.” “All the performers here are superbly married to their material, matching strengths to strengths,” Shaw observes, including the “soaring, pure, effortless, gorgeous” N’Kenge as the Moon, plus John Cariani, Tamika Lawrence, and Williams. Clarke “peels the gilt from the Studio 54 ceiling with her voice,” she writes, emphasizing how after her performance of “Lot’s Wife,” audience members “stay frozen in that song’s nuclear blast.”

After the pandemic Tony Awards season in which no musical revival was eligible, “Caroline, or Change” kicks off an extraordinarily exciting and competitive race. Reviews this glowing all but assure that the production will be embraced by the Tony nominating committee with a Best Revival nomination, even in spite of its planned January closing date. Its tough competition all bow later this season: the highly anticipated gender-swapped production of Stephen Sondheim’s “Company,” “The Music Man” starring Hugh Jackman and Sutton Foster, and the first remounting of “Funny Girl,” which will star Beanie Feldstein in the role that made Barbra Streisand a superstar.

At this early moment in the season, Clarke is an undeniable frontrunner in for Musical Actress. “Caroline, or Change” is her Broadway debut, but she’s an incredibly accomplished UK stage actress with six Olivier Award nominations: she has four bids for musicals and two for plays, and has won three trophies for her last three stage performances in James Baldwin’s “The Amen Corner,” the West End production of “Caroline, or Change,” and most recently a revival of Arthur Miller’s “Death of a Salesman” featuring a majority Black cast.

Clarke will have strong competition, of course. Upcoming in this season are performances from the likes of Jeanna de Waal (“Diana”), Tony-winner Katrina Lenk (“Company”), Tony-nominee Carmen Cusack (“Flying Over Sunset”), two-time Tony-winner Sutton Foster (“The Music Man”), Tony-nominee Joaquina Kalukango and Chilina Kennedy (“Paradise Square”), and Beanie Feldstein (“Funny Girl”). Clarke’s searing turn as Caroline will no doubt be hard to top, though. Samantha Williams also received favorable notices for the role that won a Tony in Featured Actress for Anika Noni Rose in the original production, so she could easily score her first nomination, too.

With the majority of new musicals and musical revivals yet to open, it is too early to know just how well the design elements of “Caroline” will fare. Scenic and costume designer Fly Davis and lighting designer Jack Knowles are making their Broadway debuts and could earn their first nominations – Davis more likely for scenic design than costume – while sound designer Paul Arditti has a Tony for “Billy Elliot: The Musical.” Director Longhurst will compete against Tony-winners like Marianne Elliott (“Company”), James Lapine (“Flying Over Sunset”), Jerry Zaks (“The Music Man”), and Michael Mayer (“Funny Girl”), but his work on this powerhouse of a musical might help him earn his first Tony bid.

The original production of “Caroline, or Change” was nominated for six Tony Awards in 2004, including Best Musical, Book, Score, Director, and Actress, and it won that single trophy for Featured Actress for Anika Noni Rose. It competed in an incredibly competitive season that is remembered for the showdown between “Avenue Q” and “Wicked.” While this production is not eligible in many of the same categories, it could match the original’s nominations total and perhaps even pick up more trophies than the first mounting.