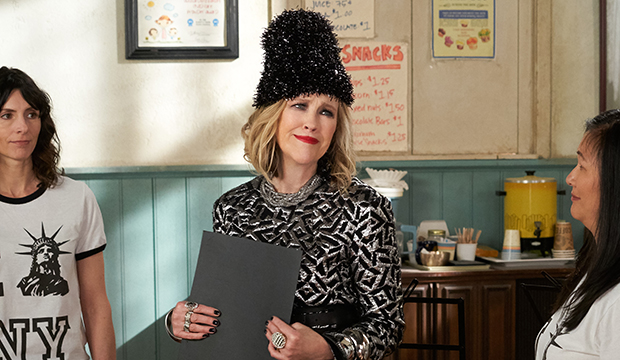 We don’t really like to say “I told you so,” but we did tell you it could happen, and now it has: “Schitt’s Creek” star Catherine O’Hara has become just the fourth person in history to sweep all five major TV acting awards in one season. The actress, a comedy legend who is finally getting the recognition she’s long deserved, completed the difficult feat on Sunday when she walked away with the Screen Actors Guild Award for comedy actress for her performance as Moira Rose on the critically acclaimed CBC/Pop TV comedy. She had already won the corresponding Television Critics Association, Emmy, Golden Globe, and Critics Choice Awards and was in first place in Gold Derby’s odds heading into the pre-taped ceremony.

To secure her place in awards history, O’Hara beat out her own “Schitt’s Creek” co-star Annie Murphy, who played her daughter in the show, as well as Christina Applegate and Linda Cardellini of Netflix’s “Dead to Me,” and Kaley Cuoco of HBO Max’s “The Flight Attendant.” She now follows in the footsteps of Sarah Paulson, who became the first person to win all five awards during the 2016-17 TV season for her turn as Marcia Clark on FX’s limited series “The People v. O.J. Simpson: American Crime Story.” Michelle Williams and Phoebe Waller-Bridge then became just the second and third performers to do it when they swept the awards last season for their respective performances on the FX limited series “Fosse/Verdon” and the Amazon comedy “Fleabag.”

O’Hara’s journey began last summer when she won the Television Critics Association Award for Individual Achievement in Comedy, one of the few gender-neutral awards that is given out in the industry. It was her second TCA Award nomination and first win after losing to Waller-Bridge the year prior. Then in mid-September, the comedienne took home the Primetime Emmy Award for Best Comedy Actress. It was her second nomination and first win in the category, though it was her second Emmy win overall, as she earned an award for writing for “SCTV Network” in 1982. O’Hara then followed up the TCA Award and Emmy with the corresponding Golden Globe in February and the Critics Choice Award in early March.

With an excellent performance and plenty of momentum on her side, it seemed quite obvious that O’Hara was going to sweep. But TV comedy actress wasn’t the only honor “Schitt’s Creek” received at the SAG Awards on Sunday. The cast also walked away with the SAG Award for TV comedy ensemble. Unfortunately, series co-creators and stars Eugene Levy and Dan Levy weren’t able to defeat Jason Sudeikis in the TV comedy actor race; the “Ted Lasso” star has been on a roll lately, having already won the Golden Globe and the Critics Choice Award.