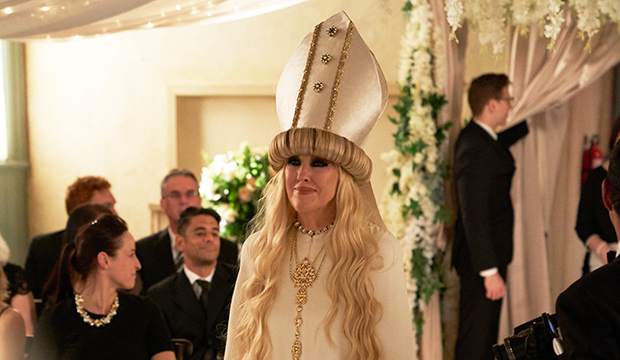 Only three people have managed to do it so far, and now Catherine O’Hara — a comedy legend even before taking on the show-stopping role of Moira Rose in the CBC/Pop TV comedy “Schitt’s Creek” — is on the cusp of becoming just the fourth person in history to win all five major TV acting awards in one awards season.

Should she succeed, O’Hara would follow in the footsteps of Sarah Paulson, who first completed the incredibly difficult feat of winning the Television Critics Association, Emmy, Golden Globe, Critics Choice and Screen Actors Guild Awards during the 2016-17 season for her turn as Marcia Clark on FX’s limited series “The People v. O.J. Simpson: American Crime Story.” Michelle Williams and Phoebe Waller-Bridge became just the second and third performers to do it when they swept the awards last season for their respective performances on the FX limited series “Fosse/Verdon” and the Amazon comedy “Fleabag.”

O’Hara’s journey into the history books began last summer when she won the Television Critics Association Award for Individual Achievement in Comedy, one of the few gender-neutral awards. It was O’Hara’s second TCA Award nomination and first win after losing to Waller-Bridge the year before. Then in mid-September, the comedienne took home the Primetime Emmy Award for Best Comedy Actress. It was her second nomination and first win in the category, though it was her second Emmy win overall, as she earned an award for writing for “SCTV Network” in 1982. O’Hara followed up the TCA and Emmy Awards with the corresponding Golden Globe in February and then the Critics Choice Award last weekend.

All that leaves now is the Screen Actors Guild Award for comedy actress, a category in which she’s nominated against her “Schitt’s Creek” co-star Annie Murphy, as well as Christina Applegate and Linda Cardellini of Netflix’s “Dead to Me,” and Kaley Cuoco of HBO Max’s “The Flight Attendant.” She is currently sitting in first place in Gold Derby’s combined odds, and while there might be some concern over vote-splitting with O’Hara and Murphy competing in the same category, O’Hara is the person with all the momentum heading into the SAG Awards. Murphy was nominated in the supporting category at the Emmys, Golden Globes and Critics Choice, but she only managed to take home the Emmy (“Schitt’s Creek” swept all of the comedy categories). There’s some overlap in the two voting bodies, but it seems like this is O’Hara’s award to lose at this point.

If we take a little trip through history, you’ll notice that Paulson and Williams both swept for limited series, meaning it was their only opportunity to win for their respective performances. Waller-Bridge was the first person to win for a regular series, but she was up for the second and final season of “Fleabag,” meaning it was also voters’ only chance to recognize her for her work. The same situation now applies to O’Hara on “Schitt’s Creek.” This could also play into how voters choose to cast their votes as well.

While a win on April 4 would make O’Hara the fourth person to complete the TV grand slam in a single awards season, it should also be noted that five other actors have completed the TV acting sweep for a single performance, but have done it over the course of several years. Those actors are Rachel Brosnahan (“The Marvelous Mrs. Maisel”), Bryan Cranston (“Breaking Bad”), Claire Danes (“Homeland”), Tina Fey (“30 Rock”) and Julianna Margulies (“The Good Wife”).