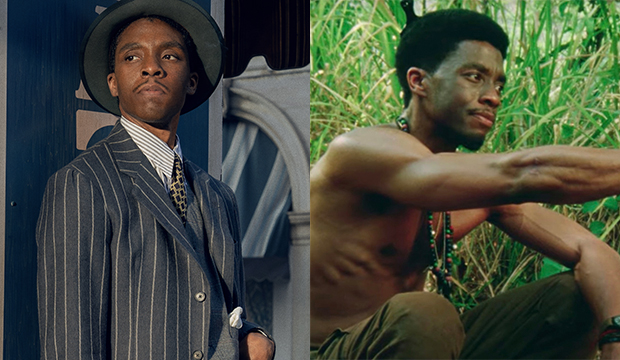 Boseman, who died in August from colon cancer, is up for lead actor for “Ma Rainey” and supporting actor for “Da 5 Bloods.” He’s also the 12th performer to get two individual SAG bids in one year and the first to do so posthumously. All four of his nominations were forecasted in Gold Derby’s odds, which had Boseman in first place in lead and in third place in supporting for “Da 5 Bloods.” “Ma Rainey” and “Da 5 Bloods” were in second and fourth, respectively, in the ensemble odds.

People have earned four SAG nominations in one year before — but they were for film and TV. Jamie Foxx first did it for his big 2004: he was shortlisted three times in film, in lead actor for “Ray,” which also received an ensemble bid, and in supporting for “Collateral.” His fourth bid came for his performance in the TV movie “Redemption: The Stan Tookie Williams Story.” Foxx won the lead statuette for “Ray” en route to the Oscar. Maggie Smith quadrupled up eight years ago with individual and ensemble nominations for “The Best Exotic Marigold Hotel” and “Downton Abbey,” taking home ensemble for the PBS series.

While no one had ever crossed the four film nominations threshold until now, many have come close, as getting three bids in one year is quite common — it’s happened 12 times, with Julianne Moore achieving it twice. Last year, three people snagged triple noms: Al Pacino, Margot Robbie and Boseman’s Marvel-mate Scarlett Johansson. In fact, Johansson was a “Marriage Story” ensemble nomination away from four after scoring individual bids for the divorce drama and “Jojo Rabbit,” along with an ensemble one for the latter.

In lead, Boseman is up against Riz Ahmed (“Sound of Metal”), Anthony Hopkins (“The Father”), Gary Oldman (“Mank”) and Steven Yeun (“Minair”). His competition in supporting are Sacha Baron Cohen (“The Trial of the Chicago 7”), Daniel Kaluuya (“Judas and the Black Messiah”), Jared Leto (“The Little Things”) and Leslie Odom Jr. (“One Night in Miami”).

The other ensemble nominees are “Minari,” “One Night in Miami” and “The Trial of the Chicago 7.” Boseman won the ensemble honor two years ago with the “Black Panther” cast.