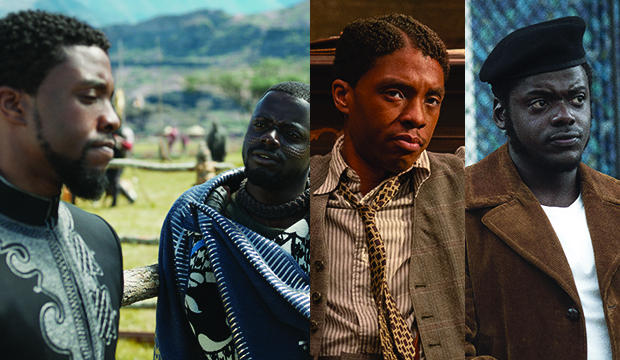 It’s not quite a reunion, but two “Black Panther” (2018) actors could become Oscar winners on the same night come April 25. Chadwick Boseman, the late actor who portrayed T’Challa, aka the Black Panther, in multiple Marvel films, and Daniel Kaluuya, who portrayed T’Challa’s best friend W’Kabi in the “Black Panther” solo film, are both poised to receive Oscar nominations on Monday — and both men are currently frontrunners in their respective races.

Boseman, who died Aug. 28 after a silent and secret battle with stage four colon cancer, is contending for Best Actor for his performance in the Netflix film “Ma Rainey’s Black Bottom,” which hit the streaming service late last year. It would be the actor’s first Oscar nomination (he’s also in the running for a supporting bid for “Da 5 Bloods”) and win, but not his first award for this performance. Boseman has already posthumously received the Golden Globe for Best Drama Actor and the Critics Choice Award for Best Actor for his performance in the film, which is based on the stage play of the same name by August Wilson and follows a turbulent recording session with blues singer Ma Rainey (Viola Davis).

In the film, Boseman portrays ambitious trumpeter LeVee Green, who has some big dreams of his own, and this potential nomination is as close to a sure thing as one can get. He has been the favorite to win since the film started screening in November and is still in first place in Gold Derby’s combined odds, with 26 Experts predicting him to triumph. If he does, he would be the first posthumous acting winner since Heath Ledger won the Oscar for Best Supporting Actor for “The Dark Knight” in 2009 and just the third posthumous acting winner in Oscars history (the first being Peter Finch, who won Best Actor for “Network” in 1977).

SEE ‘Judas and the Black Messiah’s’ Daniel Kaluuya: Fred Hampton ‘had a lot of love in him’ [EXCLUSIVE VIDEO INTERVIEW]

Boseman could add several other awards to his name before the Oscars are handed out though. He is nominated for four film Screen Actors Guild Awards, the first person to ever achieve such an honor (the SAG Awards will be handed out on Sunday, April 4). He is nominated individually for his performances in “Ma Rainey” and Spike Lee’s Vietnam War film “Da 5 Bloods,” and is nominated as part of the cast of both films in the ensemble category as well. Boseman and Kaluuya previously won ensemble as part of the “Black Panther” cast. Boseman is also up for Best Actor at the BAFTAs, which will be held on April 11.

Meanwhile, Kaluuya is in the running for Best Supporting Actor for his performance in “Judas and the Black Messiah,” which debuted in theaters and on HBO Max in February. The movie tells the story of Fred Hampton (Kaluuya), the chairman of the Illinois chapter of the Black Panther Party who founded the Rainbow Coalition and was later betrayed by William O’Neal (Lakeith Stanfield), an FBI informant who had infiltrated the party. Kaluuya is currently sitting in first place in Gold Derby’s combined odds, with 14 Experts predicting him to walk away a winner in late April. It would be his first Oscar win out of two nominations — he was previously nominated for his work in Jordan Peele’s 2017 horror film “Get Out,” which also featured Stanfield.

For his excellent performance in “Judas and the Black Messiah,” Kaluuya has already been recognized by the Hollywood Foreign Press Association and the Critics Choice Association, earning both the Golden Globe and the Critics Choice Award for Best Supporting Actor. He’s also nominated for a Screen Actors Guild Award, competing against Boseman in the race for Best Supporting Actor, and a BAFTA.

What’s more, “Judas and the Black Messiah” was produced by “Black Panther” writer and director Ryan Coogler, so all three could be simultaneous Oscar nominees if “Judas” makes Best Picture, where it’s currently in ninth place in the odds. If both Kaluuya and Boseman are able to continue on their respective paths this awards season and eventually become first-time winners on Oscar night, it would be a somber affair as we remember and mourn the loss of the latter, but it would also be a celebration for “Black Panther” fans. Given the actors’ track records thus far, you might want to start lining up your “Wakanda forever!” tweets now.