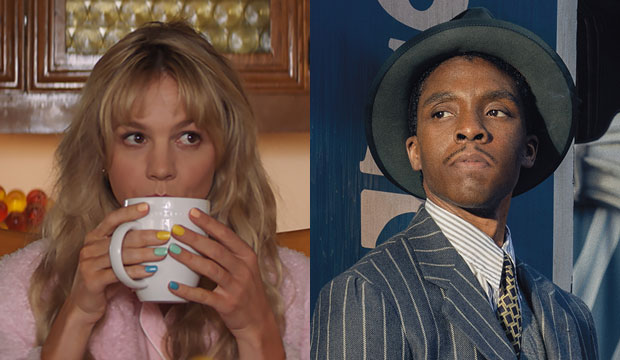 We were predicting Carey Mulligan (“Promising Young Woman”) and the late Chadwick Boseman (“Ma Rainey’s Black Bottom”) to win lead-acting Oscars on April 25, but they were upset by Frances McDormand (“Nomadland”) and Anthony Hopkins (“The Father”), respectively. The awards season isn’t quite over for Mulligan and Boseman yet, though. Their performances are actually both nominated for Best Performance in a Movie at the MTV Movie and TV Awards.

Though the MTV Awards are generally geared towards young audiences and tend towards blockbusters over the prestige fare that appeals to the motion picture academy, this year’s Best Performance in a Movie lineup is surprisingly Oscar-friendly. Four of the five nominees were just in contention over the weekend: in addition to Mulligan and Boseman, there are Best Supporting Actor winner Daniel Kaluuya (“Judas and the Black Messiah”) and Best Supporting Actor nominee Sacha Baron Cohen (“The Trial of the Chicago 7”). Even the fifth MTV nominee had Oscar buzz: Critics Choice contender Zendaya (“Malcolm and Marie”).

But it won’t be of much use to look at the results from previous awards to predict the winner here since these recipients will strictly be decided by fans voting online. There has been some overlap between the academy and MTV viewers in cases where the Oscar winner has a huge online fan base (like Jennifer Lawrence in “Silver Linings Playbook” and Leonardo DiCaprio in “The Revenant”), but MTV fans don’t tend to be swayed by minor precursors like the Academy Awards.

So who will win? Well, Boseman is a previous MTV champ, having won this award in 2018 for “Black Panther.” And his shocking death last summer at age 43 after a long, secret battle with cancer might inspire fans to rally around him again. “Ma Rainey,” though, is a small-scale, intimate character drama adapted from a play, which isn’t the kind of film that normally gets MTV fans buzzing. Nevertheless, Boseman is the front-runner in our odds, based on the combined predictions of Gold Derby users as of this writing.

Boseman isn’t the only past MTV champ in the running, however. Kaluuya won the Next Generation award in 2017 for his breakthrough performance in “Get Out,” and “Judas and the Black Messiah” might appeal to politically awakened, progressive young audiences in the wake of the Black Lives Matter protests of 2020. The same could be true for Cohen, a previous MTV champ for “Borat” who plays left-wing activist Abbie Hoffman in “Trial.” Mulligan is nominated for her first MTV Award but appeals to righteous feminist anger in “Promising Young Woman.”

Meanwhile, Zendaya has a huge fan base of her own, though she might encounter the same problem as Boseman since the fans who’d gravitate to her in the “Spider-Man” movies, “The Greatest Showman,” and “Euphoria” might not have been all that interested in the talky two-hander relationship drama “Malcolm and Marie.”

So this race could be every bit as divided as the Oscars were, though at least this time Mulligan and Boseman won’t have to worry about McDormand and Hopkins stealing their thunder.