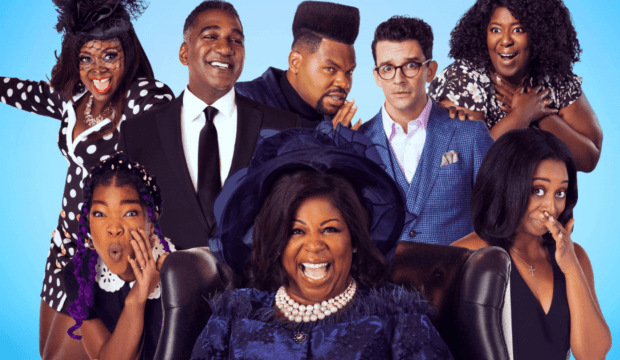 Ten years after making his Broadway debut as an actor in “The Book of Mormon,” Douglas Lyons just took his first bow as a playwright with “Chicken & Biscuits,” which opened at the Circle in the Square Theatre on Oct. 10. The comedy centers on the funeral of a pastor, which brings together two at-odds sisters and raises a whole host of family foibles.

In a rave review, Ayanna Prescod (Variety) calls the play “a portrait of Black joy, love and laughter” that features “a brilliant script that’s fresh, relatable and laugh-out-loud funny.” She applauds the entire “dynamic” cast, but gives particular kudos to Aigner Mizzelle who “gives nuance to the young Black woman screaming to be seen, included and understood” and a “phenomenal” Urie.

Helen Shaw (Vulture) also appreciated the show’s humor and heart. “‘Chicken & Biscuits’ will not serve every hunger,” she admits, but she says the play is “a meal full of comfort dishes, difficulties resolved, and love requited.” Not all of the reviewers felt similarly. Jesse Green (New York Times), for one, suggests, “This family comedy, with its cheek and secrets and eulogies and amens, wants to offer audiences living in bad times an old-fashioned good one,” but says for him it feels too much like the type of play that “otherwise went out of style a few decades ago.”

In a busy season for new plays, it seems too early to speculate on how a comedy with varied reviews will fare at the 2022 Tony Awards. “Chicken & Biscuits” is one of 10 new works currently slated to open during the eligibility window, which also includes “Pass Over,” “Is This a Room,” “Thoughts of a Colored Man,” “The Lehman Trilogy,” “Dana H.,” Lynn Nottage’s “Clyde’s,” Dominique Morisseau’s “Skeleton Crew,” Tracy Letts’ “The Minutes,” and “Birthday Candles.” In such a competitive year, “Chicken & Biscuits” will have to stay top of mind with the Tony nominating committee, which may be a challenge since the play’s limited run ends on Jan. 2.

The production does boast a number of past Tony nominees, though. Norm Lewis received a bid for “The Gershwin’s Porgy and Bess” (2012), which won the trophy for Best Musical Revival, while Urie has starred in two Tony-nominated productions in the past two seasons: “Torch Song” (2019) and “Grand Horizons” (2020). Costume designer Dede Ayite, meanwhile, just celebrated two nominations at this year’s Tonys for her work on “Slave Play” and “A Soldier’s Play,” and she has revivals “American Buffalo” and “How I Learned to Drive” forthcoming next year. Beyond these recognizable names, Tony nominators may also wish to honor a feel-good play after such a challenging 18 months, too.