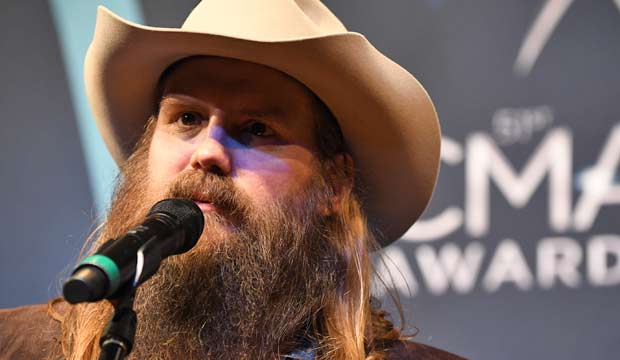 In case you missed the 2021 ACM Awards, Chris Stapleton received one of the biggest honors of the night, with his album “Starting Over” winning Album of the Year. With the ACMs and CMAs being good precursors to see what will eventually get into the Grammys, let’s review Stapleton’s important win and see how it might affect the album going forward this awards season.

“Starting Over’s” win wasn’t unexpected. It led Gold Derby’s odds by a comfortable margin, and it was also the bestselling album nominated in the category, peaking at number-three on the Hot 100 with over 100,000 units in its first week. The album was also acclaimed, scoring 81 on MetaCritic, the highest among the nominees besides Ashley McBryde’s “Never Will” (which scored 83). With a great combination of sales and acclaim, it’s not a surprise the album was the front-runner and ended up winning.

SEEHow did they win?! Breaking down the 4 biggest upsets at ACM Awards 2021

On top of that, Stapleton is pretty much an awards magnet. As of now he has a whopping nine ACMs, 10 CMAs, and five Grammys. Among his Grammy wins, he has two for Best Country Album (“Traveller” and “From A Room: Volume 1”), making him one of the six artists to have won that category more than once. He’s also the only male artist to win Best Country Solo Performance twice (for “Traveller” and “Either Way”), so you can tell the voting members are really fans of his music.

Given how loved he is by awards voters, it would be weird to see him miss Grammy nominations at the very least. That said, there’s still time for other releases to arise, especially with rumors of big country stars like Kacey Musgraves releasing this year. Musgraves’s last album, “Golden Hour,” swept all of its Grammy noms in 2019, including Album of the Year, which is not an easy feat for a country album.

That said, Stapleton’s biggest hurdle might be the nomination review committee with their absolutely bizarre snubs over the past two years in the country field. The last two ACM and CMA Album of the Year winners — Maren Morris’s “GIRL” and Luke Combs’s “What You See Is What You Get” — were snubbed, with both missing Best Country Album. Morris did get a single nom for Best Country Duo/Group Performance (probably due to her collaborator Brandi Carlile‘s popularity with the recording academy in recent years). But Combs wasn’t even that lucky, getting completely shut out from the awards despite having one of the most successful country albums of the past decade.

Could those snubs just be flukes, or are they perhaps just the beginning of a new trend of passing over country industry favorites? Stapleton is the right person to prove this one way or the other; if there’s one artist to set things back to normal in the country field, it’s definitely him. There’s also not really anyone obvious to snub Stapleton for. It’s possible that Morris and Combs were excluded to ensure wins for then-overdue country icon Tanya Tucker and under-awarded Miranda Lambert, respectively. So if the Grammys decide to leave him out, who do you think they’ll crown instead?