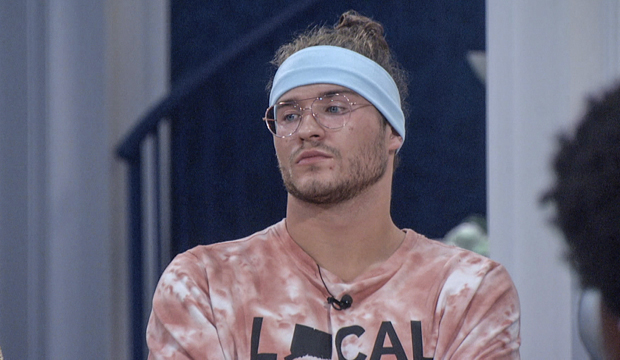 After three days of exhaustive campaigning, Christian Birkenberger failed to flip the house in his favor and was voted out of “Big Brother 23” by a vote of 7-2 on Thursday’s live eviction episode. The 23-year-old aspiring actor was successfully backdoored by Head of Household Derek Xaio after Britini D’Angelo won the Power of Veto and removed herself from the block. Christian was put up as the replacement nominee next to his former Kings teammate Sarah Beth Steagall. Alyssa Lopez and Xavier Prather were the only two houseguests that voted for Christian to stay.

“It was a temporary goodbye kiss,” Christian told host Julie Chen Moonves in his exit interview when asked about the steamy smooch he planted on Alyssa as he walked out the door.” But is there a future for this showmance? “I discussed it with her,” he admitted. “I don’t know where we stand at the moment, but she says that I am her ‘girly girl.’ That’s what she calls it. I want something after this for sure. But two months of not seeing her potentially would be a long time. So we’re gonna wait until after.”

Julie gave Christian an A+ for effort when discussing his campaign to stay in the house. “I had the numbers against me,” he said. “People in this house like to pull out numbers. With a 57% winning streak with all the comps, once I was up there, it didn’t matter who I was sitting next to. They figured this was the time to take a shot at me because they didn’t know if they could get another opportunity later down the line. I didn’t stand a chance.”

Derek X. and Christian were both members of the Royal Flush alliance, so does the comp beast respect the HOH’s game move? “I do because it’s a shot I should have taken last week when I was HOH,” he admitted. “I respect it in the sense that he did what was best for his game because I wanted to do that same shot for him. But I think it was not a smart decision because he’s going to go out much sooner than if I was still around.”

“I’m excited I had this opportunity,” Christian said before signing off. “I really didn’t come for the money. I came to make some good friends and I did. I actually really came to play so I was the most upset when I couldn’t play in the wall competition because I wanted to compete. I’m happy I had the opportunity.”

Christian became the fifth houseguest evicted from Season 23 of “Big Brother.” His Day 37 eviction was preceded by Whitney Williams on Day 30, Brent Champagne on Day 23, Brandon “Frenchie” French on Day 16 and Travis Long on Day 9. A new HOH will rise to power on Sunday, August 15 on CBS.