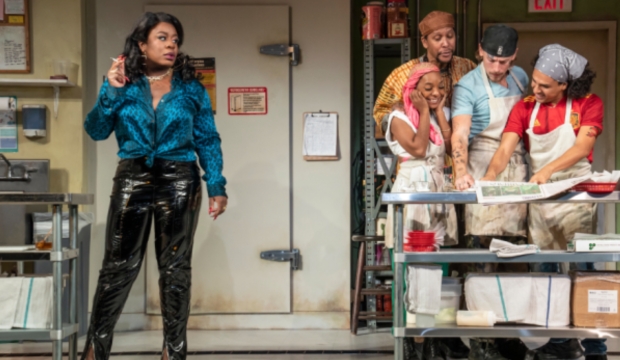 It has been almost five years since playwright Lynn Nottage made her Broadway debut with “Sweat” and almost 10 since Uzo Aduba last appeared on a Broadway stage. They both return, triumphantly, in Nottage’s “Clyde’s,” a new play with a connection to “Sweat,” which earned three Tony Award nominations and won the Pulitzer Prize for Drama. “Clyde’s” opened at the Second Stage Theater’s Hayes Theater on Nov. 23.

“Clyde’s” stars Aduba in the title role, the proprietor of a roadside sandwich shop in Pennsylvania who hires former convicts as kitchen staff. The comedy ascends to Biblical proportions as Clyde’s employees navigate their boss’ viciousness and strive for personal redemption through the art of making the perfect sandwich. The ensemble also boasts two-time Emmy-winner Ron Cephas Jones, Edmund Donovan, Reza Salazar, and Kara Young under the direction of Nottage’s frequent collaborator Kate Whoriskey.

Critics relished Nottage and Aduba’s returns to Broadway. Naveen Kumar (Variety) writes that “Clyde’s” “has a sitcom quality that’s paradoxically inviting,” a genre through which Nottage “questions which sorts of rooms and people have previously been considered worthy of sustained attention.” He commends Aduba, who “makes an acrylic-licking meal of the part” of Clyde, “reveling in the swagger and intimidation Clyde hurls about like a flamethrower.” He also applauds the “cool and easy” Jones and the “delectable costumes” by Jennifer Moeller.

In an already-impressive season for new plays, “Clyde’s” is another strong entry that will vie for Tony Awards nominations in the spring. What might set “Clyde’s” apart from its fellow new works is revered, two-time Pulitzer Prize-winning playwright Nottage’s deft balance of stage comedy and vital social commentary. Juan Michael Porter II (Did They Like It?) calls “Clyde’s” a “multi-genre encompassing masterpiece loaded with more layers than a metatextual onion.” One of ten new plays eligible this season, “Clyde’s” will compete for one of five Best Play slots against a slate that includes “Pass Over,” “Chicken & Biscuits,” “Is This a Room,” “Thoughts of a Colored Man,” “The Lehman Trilogy,” “Dana H.,” “Skeleton Crew,” “The Minutes,” and “Birthday Candles.”

As the deliciously memorable title character, Aduba will no doubt stay in Tony nominators minds for a long time, too. After her last appearance on Broadway in a revival of “Godspell” in 2011, Aduba achieved success on the small screen, with five Emmy nominations and three trophies for her roles on “Orange is the New Black,” “Mrs. America,” and “In Treatment.” “Clyde’s” could possibly earn Aduba her very first Tony nomination, even though the Best Actress race is already crowded with Emily Davis (“Is This a Room”), Deirdre O’Connell (“Dana. H”), and LaChanze (“Trouble in Mind”) earning rave reviews, plus upcoming performances from Phylicia Rashad (“Skeleton Crew”), Sarah Jessica Parker (“Plaza Suite”), the current Tony champ Mary-Louise Parker (“How I Learned to Drive”), Ruth Negga (“Macbeth”), and others.

Though it’s too early to tell how the Tony races in the Featured categories will shake out, stage and screen veteran Ron Cephas Jones earned strong notices for his performance as Montrellous, the philosopher of the staff, as did Kara Young in her Broadway debut as struggling single mother Letitia. Of the design team, both costume designer Jennifer Moeller and scenic designer Takeshi Kata received critical kudos, as did Kate Whoriskey, who missed out on a nomination for “Sweat.”