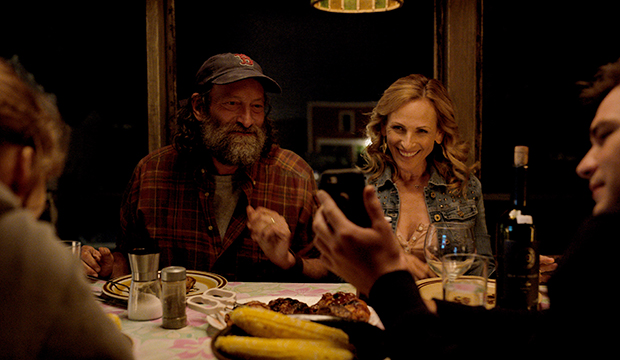 Marlee Matlin has received raves from critics for her supporting performance in the new film “CODA,” the likes of which she hasn’t received since her film debut in 1986’s “Children of a Lesser God.” In “CODA,” which was released in August in theaters and Apple TV+, Matlin plays Jackie, the deaf mother of a hearing teenage girl. The actress has been championing the film since it premiered at Sundance, where it won the lion’s share of the festival’s awards, and numerous publications have profiled her, putting her in the mix for a possible Oscar nomination for Best Supporting Actress.

“CODA” centers on Jackie’s daughter, Ruby (Emilia Jones), and her desire to leave the nest to become a singer, which causes tension with both of her deaf parents as they often rely on her to communicate in their day-to-day fishing business. But unlike many Hollywood productions about the culturally Deaf, Matlin’s character is not defined by her deafness. Jackie is also a sexual person and isn’t afraid to express her desires, much to the delight of her husband (Troy Kotsur) and dismay of her daughter. Matlin is delightful in the film’s more comedic moments, but she also gets to be vulnerable, like in one standout scene in which she tells her daughter about the day she was born.

The Oscar race for Best Supporting Actress is still all over the place with no solid frontrunner, but Matlin is one of the expected nominees in these early stages. The actress is currently in third place for a nomination, according to the latest Gold Derby odds, with only Ann Dowd (“Mass”) and Kirsten Dunst (“The Power of the Dog”) ahead of her. Matlin is a recognizable name to the academy and if she continues to put herself out there in the awards derby, and if the film has a Sundance-like reception from the industry, she could find herself back at the Oscars as a nominee for the first time in 35 years.

Matlin made history twice over with her Best Actress win at the Oscars in 1987 for “Children of a Lesser God.” And in both cases, they are records that still hold after three decades: She became the first (and still only) deaf actor of any gender to win an Oscar and at just 21 years old, the youngest Best Actress winner in Oscar history. She was also one of only four Best Actress winners to take home the gold for their film debut, following Shirley Booth, Julie Andrews and Barbra Streisand. Matlin would only appear in film sporadically over the following decades, thriving in guest and recurring roles on TV. A nomination for “CODA” from the Oscars or any awards organization would be the first feature film recognition for Matlin since “Children of a Lesser God.”