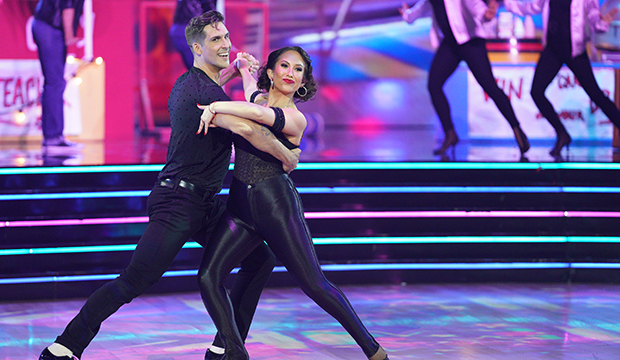 After 29 seasons, “Dancing with the Stars” finally featured its first same-sex couple this season with JoJo Siwa and Jenna Johnson. Season 30 also includes Cody Rigsby, who is openly gay and is paired with two-time champ Cheryl Burke. Asked by GLAAD if he thought about dancing with another man, the Peloton instructor shared that the possibility didn’t even cross his mind.

“I’m a small fish on this show. Someone might be like, ‘Who? Cody what? Who the hell is Cody Rigsby?’ Honestly, when the conversation and when the opportunity came up for ‘Dancing with the Stars’, I was just so excited to be on the show, I guess I didn’t even think it was a possibility, so I even really didn’t bring it up,” Rigsby said. “I was just kind of taken aback by, ‘Oh, my God! This amazing opportunity!’ I just wanted do it. So it didn’t even come up. Had I maybe had a moment to breathe and recognize an opportunity, I definitely would have asked.”

Rigsby added that he knows Val Chmerkovskiy, who’s partnered with Olivia Jade this season, “is really open to having a same sex partner for next season and I think that would be incredible.”

Chermovskiy is married to Johnson, who scored the season’s first perfect score last week with Siwa. Siwa and Johnson have the highest average score of the season and will make even more history if they become the first same-sex couple to win. Rigsby admires Siwa for doing the show so soon after coming out and representing for the LGBTQ community.

“She’s incredible, what she is doing on this show, representing — it’s amazing,” he said. “She is showing a lot of little girls and little boys and kids who they can be and giving them permission to create their own path. She is just so wildly herself in so many ways. I’m so glad she’s doing this and showing what young girls can do.”

As for himself and Burke, after they both contracted COVID-19 three weeks ago, they’re trying to make up lost time. “Those two and a half weeks of learning dances via Zoom was such a big challenge and put us at such a disadvantage,” Rigsby noted. “So we’re making up for lost time being together, connecting with each other because I think that’s exactly what’s so important to get through this — having that connection, knowing what our bodies feel like but also knowing how to trust and lean into each other. So right now I am just kind of focused on taking it day by day and a slow and steady growth. I feel the past few weeks have been good.”