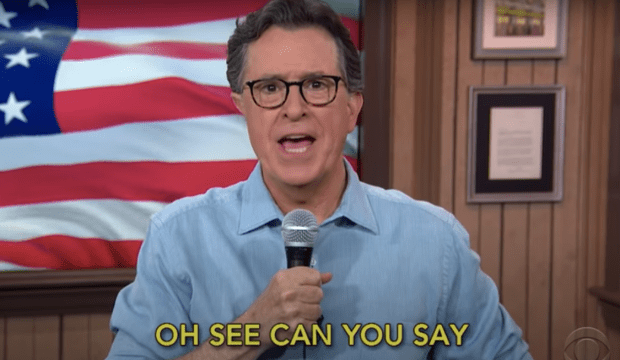 On Thursday’s “Late Show,” Stephen Colbert reached out to a higher power with a plea that Georgia governor and a “man whose smile has anger issues,” Brian Kemp, never runs for president. On Wednesday, Kemp went on Fox News to condemn vaccine passports and butchered an expression so badly that George W. Bush was like, “wait, what did he say?”

“It is America, the land of the home, and freedom reigns,” Kemp said as he signed off from his interview.

“Land of the home and freedom reigns! It’s as American as pie-ball and the mom and bars,” Colbert joked.

“I got to say, props to Fox host Lawrence Jones, who just rolled with it,” Colbert said of the young Fox News host who slickly replied to Kemp’s mistake without missing a beat. “For now it is,” he said.

“That poise is going to come in handy as a rudderless GOP descends into patriotic word salad,” Colbert said. He imitated a Republican lawmaker on Fox News: “Lawrence, this country was built by Abraham Freedom, no matter what Joe Bantifa’s laser babies say about cancel-culturing our eagle guns reigns.”

“For now it is,” the clip of Jones answered.

Then Colbert unveiled his own take on the national anthem.

“And patriots like Governor Kemp will not be constrained by the traditional, actual lyrics to ‘The Star-Spangled Banner,’” Colbert continued. “So as a tribute to him, I think, please put your hand over the organ of your choice, and join me in this Kemp-inspired rendition of our national home and freedom reign: ‘Oh, see can you say, by the Donner Partay, what so twilight we proud, at the gleaming PlayStation. Whose bra straps and big cars, drew the Perry Farrell o’er the streaming we watched, were so galloping ponies. And the Rockettes met Bears, Robert Durst is an heir, gave Froot Loops the right that our Fraggles still cared. Oh, see can you stop big Bruce Banner, Flavor Flav, o’er the land of the home, and the freedom reigns. Ball Play!’”