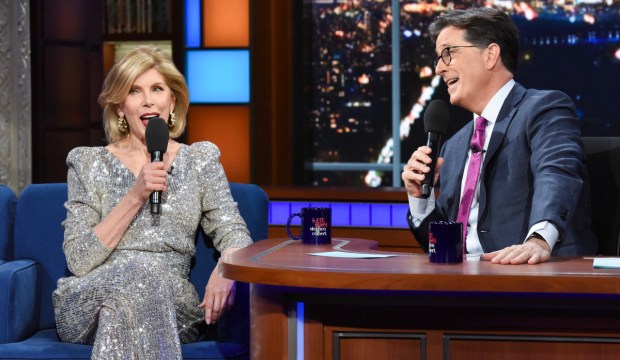 “The Good Fight” star Christine Baranski appeared on Wednesday’s “Late Night” and sang a little duet of “Side by Side” from Stephen Sondheim’s “Company” with Stephen Colbert. The performance was notable, Baranski noted, as it made them the first people to sing Sondheim on Broadway since the theater industry went dark last year because of the coronavirus pandemic.

Colbert said that he and Baranski had talked on the show during the Zoom era, and had discussed singing together, but decided not to do it because it’s too hard to sing over Zoom. “You can’t get the rhythm together,” he said.

But now that they were together in person at Broadway’s Ed Sullivan Theater in front of a studio audience, Colbert asked if she’d like to try it again. She asked (Oscar-winning!) bandleader Jon Batiste to play her a little Sondheim in D, and off they went.

Baranski is a much better singer than Colbert, but they definitely were rhythmically aligned. And it was really nice to see people singing together on a late-night show, opening their mouths wide near each other’s faces for the first time in well over a year. The performance was more about appreciating being able to do something again that we used to take for granted than about technical skill, and that’s fine.

Elsewhere in the interview, Baranski talked about how “The Good Fight” is adjusting to the post-Trump era and working with Mandy Patinkin, who’s playing an eccentric judge on Season 5 of the Paramount+ legal drama.