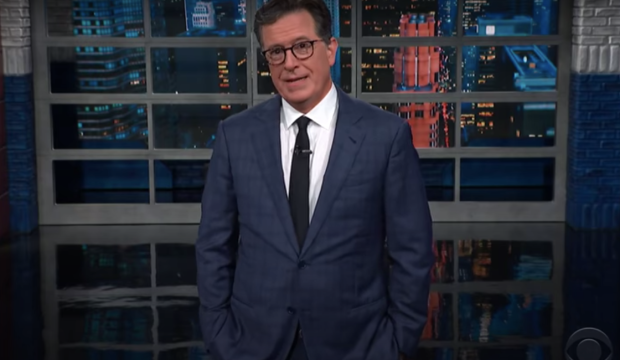 Stephen Colbert opened Tuesday’s “Late Show” by saying it was a beautiful day in New York City: “85 degrees, 75 percent humidity, and this afternoon, Andrew Cuomo resigned.” The studio audience cheered the news that the governor of New York was leaving office due to allegations in a report by the state attorney general that he sexually harassed 11 women.

“Don’t let the door hit you on the butt on the way out,” Colbert added. “But if it does, that door should also resign.”

Colbert complained that Cuomo’s resignation won’t take effect for 14 days. “Evidently, he gave himself two weeks’ notice,” he said. Colbert also didn’t really think the governor took responsibility for his actions. “In my mind, I’ve never crossed the line with anyone,” Cuomo said during his resignation press conference. “But I didn’t realize the extent to which the line has been redrawn.” When “The Late Show” rolled that clip, it elicited boos from the studio audience.

“I don’t know exactly what line he’s talking about, but hopefully he’ll explain it in his new book, Andrew and the Purple Crayon,” Colbert said. “Warning: that’s not a crayon in his hand… but it is purple.”

In two weeks, New York will have its first female governor, current Lt. Gov. Kathy Hochul. “Hochul will be taking the seat vacated by Cuomo, hopefully after putting a towel down first,” Colbert joked.

Later in the show, Colbert welcomed CNN’s media reporter Brian Stelter as a guest and pressed him on the relationship between CNN anchor Chris Cuomo and Cuomo’s brother, the disgraced governor. The younger Cuomo served as an informal advisor to the political leader and helped Andrew Cuomo’s aides craft messaging during his scandal. Colbert asked Stelter if Chris Cuomo’s double duty caused conflict at CNN.

Stelter said that some people were mad at the younger Cuomo, but he believes that anchor has an ethical line he won’t cross with helping his brother, which elicited groans from the audience. Stelter explained that CNN management told Chris Cuomo that they wouldn’t forbid him from speaking to his brother, but it was inappropriate for him to advise his brother’s aides, and Chris Cuomo must recuse himself from talking about his brother’s problems on the show.

“Then why didn’t they rule that way when his brother was on pretty much every night during the COVID crisis?” Colbert asked. “That seems like an odd conflict of rules.”

TONIGHT: @BrianStelter talks about the "wide range of opinions" inside CNN regarding anchor Chris Cuomo's coverage of his brother Andrew. #LSSC pic.twitter.com/27Z02RTNa3

Stelter claimed there was no page in the journalism ethics handbook about this particular set of circumstances. But it’s not necessarily hindsight to question the legitimacy of Chris Cuomo’s interviews with Andrew Cuomo. CNN was criticized as far back as spring 2020 for allowing the Cuomo brothers to appear on television together. The network was one of a number of places that helped boost Andrew Cuomo’s profile during the pandemic by giving him an extremely friendly platform.

But despite the obvious conflict of having a Cuomo family member report on the governor and the overall dicey situation at CNN, Stelter said his network covered Andrew Cuomo’s scandal and resignation “just the same as we would any other story.”

“Ultimately, isn’t that what matters?” he asked.