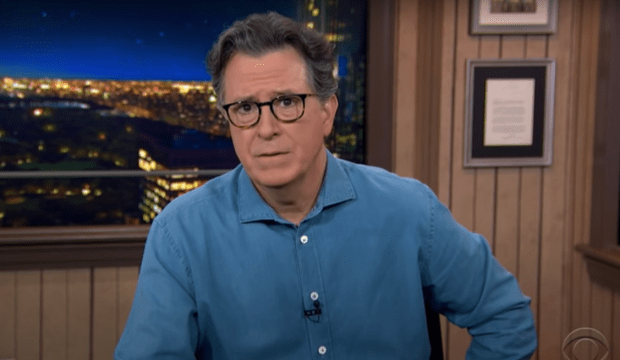 At the top of Tuesday’s “Late Show,” host Stephen Colbert briefly but meaningfully addressed the conviction of former Minneapolis police officer Derek Chauvin for the murder of George Floyd, an unarmed Black man. Chauvin, who is white, knelt on Floyd’s neck for nine minutes and 29 seconds until after he was dead last May, an incident that was captured on video and sparked protests all over the world. The video was clear evidence of homicide, and yet the outcome of the trial was uncertain because police are so rarely held to account for killing people of color in America. That Chauvin was convicted has been called both a relief, showing that the justice system works sometimes, and an indictment of a system that’s so broken and unjust that it’s a relief when it works properly. On his show, Colbert discussed that dichotomy and said that Chauvin’s conviction is one step on a journey toward justice for Black Americans.

“It’s hard to celebrate because a man is still dead, but there is a sense of relief that at least this one injustice was not compounded with indifference,” Colbert said. “And it could easily have gone the other way. No matter what you saw on that tape, this nation does not have a great track record on this subject. But at least, in this case, this man faces accountability.”

“But justice is a far more difficult goal,” Colbert continued. “America still has a problem of over-policing and systemic racism, but hopefully this is a step toward a future where police being held accountable for their actions isn’t headline material and a hope that accountability today is a deterrent for tomorrow.”

“Today is one stop on a journey that began last May and led to protests calling for that accountability in every town and every city in America,” Colbert concluded. “But this is just one stop. There is more work to be done, and it’s work that all of us should be committed to, because as Ben Crump, the Floyd family lawyer, reminded us today, justice for Black America is justice for all America.”