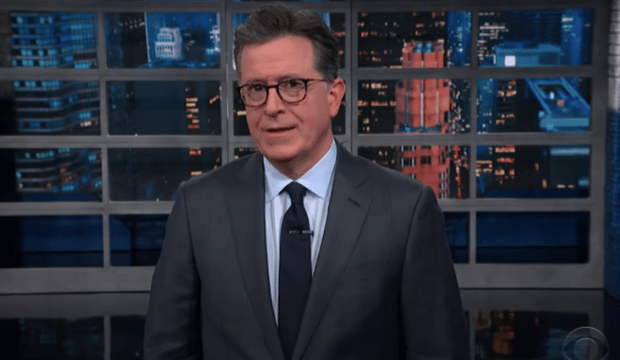 Stephen Colbert opened Wednesday’s “Late Show” by talking about election results, which were largely pretty disappointing for Democrats. “Some of you may be upset about the results, but don’t panic,” the host said. “Save your panic for climate change.”

In Virginia, Republican Glenn Youngkin, businessman and “live-action Doug,” as Colbert christened him, won the gubernatorial race. “Not to be confused with the new hit CBS show, ‘Young Glennkin.’”

“A lot of factors go into every victory and every election, but I believe the deciding factor here was that Youngkin had the one quality that Virginia voters wanted most: not being Terry McAuliffe,” Colbert joked while denigrating the Democratic candidate who had previously been the governor from 2014 to 2018.

In New Jersey, incumbent Democrat Phil Murphy was up eight points in the polls going into Election Night, but only narrowly held off Republican challenger Jack Ciattarelli in a race that was “too close to call” for most of the day Wednesday. “Of course, that’s how New Yorkers have always viewed New Jersey: way too close,” Colbert joked.

“So, it was a disappointing night for Democrats, but Democrats are used to being disappointed,” Colbert said. “That’s why they’re changing their logo from the donkey to Eeyore.”

Colbert said he ultimately couldn’t get that upset about the election results. “I’ve already endured the worst election in American history, live on TV, sitting over there, drinking a cocktail of bourbon and my own tears,” he said of the 2016 election and his infamous live special. “This one just seems like another election: ‘Oh no, Terry McAuliffe didn’t win? Will the republic survive our post-Terry future?’”

Because here’s the thing: Virginia and New Jersey both have patterns of electing governors from the opposite party of the sitting President in off-year elections. In Virginia, it’s happened in 10 of the last 11 elections.

“It makes sense, because people tend to vote more when they’re upset with the person in power, and right now that person is Joe Biden,” Colbert said. “Voting is like democracy’s Yelp review. You never leave a comment when the soup was tasty. But if you bring me still water when I asked for sparkling, I will burn your bistro to the ground,” Colbert joked.