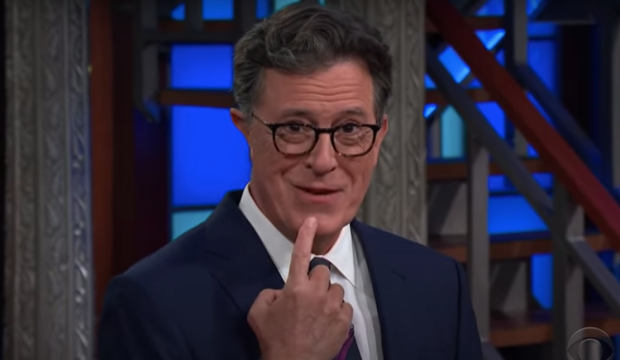 Stephen Colbert returned to “The Late Show” on Monday, and shared a story about something funny that happened to him during his summer vacation: He got disinvited from Barack Obama’s birthday party.

The 44th President turned 60 this month and celebrated with a star-studded fête on Martha’s Vineyard over the weekend. Colbert explained that he made the original guest list, but with the Delta variant blazing through the country, “a celebrity mosh pit was maybe not the wisest choice, so Obama decided to scale back the guestlist for his party.”

The New York Times reported that Conan O’Brien and David Letterman also got their invitations revoked, but Colbert was still seen on the island. “It makes sense – I am known to fill in when Letterman drops out of something,” Colbert joked. But this is a story the Times got wrong because Colbert didn’t actually go. “In the massive scaling back, I got massively scaled,” he said. “As soon as we heard, Evie [Colbert, the host’s wife] said, ‘That makes sense. Comedians should be the first people cut.’ And I don’t think she was just talking about parties. I think she meant, like, lifeboats and stuff like that, too.”

Colbert also corrected the Boston Herald, which reported that not only did the Colberts attend the party on Martha’s Vineyard, they also own a house on the island. “Boston Herald, could you please send me the address and the keys and maybe the alarm code, because I’d love to stay there someday,” he said. “I don’t own a house on Martha’s Vineyard.”

Colbert then explained what really happened. He and Evie were ready to go. They bought new clothes and booked a flight and a hotel. Then five days before the party, they got a voicemail from the Obamas’ people that they were scaling back. But since everything was already booked, the Colberts just went to Martha’s Vineyard anyway.

“It just goes to show you, kids, that if you work hard, put in your time, and get to be the No. 1 show in late-night television, you too can get disinvited from the cool kids’ party,” Colbert joked. “By the way, Mr. Former President, my own 60th birthday is coming up in three years, and you, sir, are not … gonna want to miss it. Please come. I’d be so honored if you came. I’ll scale me back to make room for you — and Michelle, obviously.”

Barack Obama could win an Emmy for Netflix series, and then he'd be halfway to EGOT