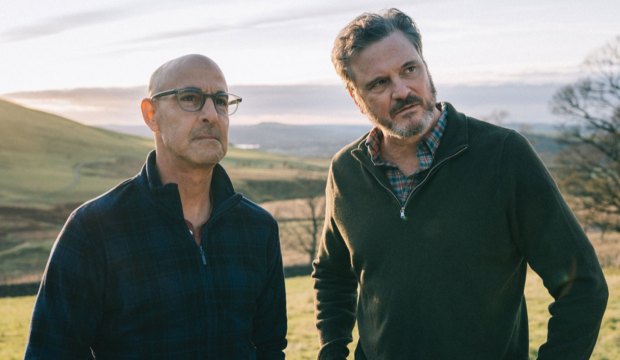 A few weeks before filming began on Bleeker Street’s poignant drama “Supernova” stars Colin Firth and Stanley Tucci did a switcheroo. They decided to flip their roles. Filmmaker Harry Macqueen (“Hinterland”) originally cast Tucci as Sam; a pianist who has been partners with novelist Tusker (Firth) for 20 years. They have decided to travel in a cramped RV through England’s Lake District to visit with friends and family before Tusker’s early onset dementia advances.

During a recent Zoom conversation with Firth, Tucci and Macqueen moderated by Variety’s Marc Malkin, Tucci explained that “as we started to sort of get towards rehearsal Colin said, ‘I think we should switch roles.’ I said, ‘I actually have been thinking the same thing.’ We told Harry, who I know was horrified at that.” But Maqueen was more amenable to the change telling his actors to read several scenes as cast and then flipping it. “We all went, ‘Well, that makes more sense,’” said Tucci. “I’m not quite sure why, but it did. Rhythmically, something made more sense. So, suddenly, I was playing Tusker”

The idea for “Supernova,” which is having a limited theatrical release before heading to streaming on Feb. 16, began germinating about five or six years ago. “A couple of things happened in quite quick succession to me,” said the British writer/director. “The first thing I was working with a middle-aged lady who, over the year I worked with her, changed hugely from being someone who was very lovely and generous and fun to being someone who was kind of opposite of that. About six months later, I found she had been diagnosed with young onset dementia.”

And simultaneously, a friend of Macqueen’s father had to be put in a care home with that type of dementia just after his 60th birthday.  “So, these things made me really want to learn about dementia just as a human really,” he said. “So, I spent two years volunteering for various charities and spending a lot of time with people who are living through this kind of thing. So, the story really is inspired by that kind of privileged time that I had and still have.”

“Supernova” is one of many dementia-themed films being released this awards season including the award-winning documentary “Dick Johnson is Dead” to the upcoming “The Father,” starring Anthony Hopkins in a bravura turn as a widower who is going down the rabbit-hole of dementia. These roles also give actors a real opportunity to showcase their talents as an actor. Julianne Moore won the Oscar as a teacher with early onset dementia in 2014’s “Still Alice.” And there has been Oscar talk for Tucci as the wisecracking Tusker who doesn’t want to be a burden on this partner.

“Supernova” is currently at 84% fresh on Rotten Tomatoes with Glenn Kenny in the New York Times  raving that “Tucci and Firth embody the best kind of masculinity, which has been missing from popular culture for so long that we’ve forgotten what it looks like. Their characters are men of passion but also men of integrity. And most important, they’re men who know what love is.” Whether you see it in a theater or at home, one needs to have a lot of tissue by your side. Malkin even admitted “my husband and I held onto each other on the couch for at least 30 minutes. It’s really, really, powerful.”

Tucci received the script first and was taken with its beautiful restraint. “A lot of writers can’t achieve that,” he said. “There was very little exposition. I loved the silences, the sort of clumsiness of the dialogue, which is the way people speak. It was incredibly poetic and profoundly moving.” Tucci, who has been friends for over two decades with Oscar-winning Firth (“The King’s Speech”) slipped the script to his buddy.

SEE Will Colin Firth (‘Supernova’) make an Oscars comeback a decade after his ‘King’s Speech’ coronation?

Firth was also smitten with Macqueen’s script. “I said, ‘I think this is beautiful and wouldn’t it be lovely to do this together.’ Stanley and I have known each other for 20 years and a lot happens to anybody in 20 years-the ups and downs of our lives are something that we’ve tended to be in one way of another, present for each other. We’ve seen each other through things, we’ve looked after each other and we’ve checked in with each other. We’ve made each other laugh. This friendship has remained consistent.”

Macqueen noted that shooting in that cramped RV was more than a challenge. But a necessary one. “We really focused on when we were making the film, in all departments, was getting it as natural and truthful as we possibly could,” he said. “So, we made a decision early on not to sort of cheat in any way, so we filmed in the RV. We filmed it, obviously, on live roads with Colin actually driving and us gripping the headrest in the back. I think it was a really good movie not to kind of try and fabricate anything.” “I want to say, I only totaled the RV once,” quipped Firth. “It was only a dent,” piped in Tucci. “It was only one half of the vehicle,” Firth noted.

Tucci did his fair share of research on early on-set dementia. “Harry had worked with this for so long that he sent me all the research,” he said. “So, I was able to access a lot of literature, access a lot of documentaries. Then we spoke with a doctor in London that Harry introduced us to.” The actor found the documentaries he saw particularly illuminating. “You can read something, but it’s abstract until you really see somebody behaving in a certain way, then you get it. It’s really just about being truthful to that behavior and represent it appropriately.”

Firth acknowledged that that his life and family have been impacted by dementia through several generations. “It’s loomed very large,” he explained. “I sometimes wonder if, because I am more familiar with the role of caring, I could identify more with the helplessness of somebody that you care deeply about going through this, the terrible unfairness, all the things that the disease does to people and what it does to your sense of identity.”

Sam, Firth noted, believes he’s the one holding it all together. But the way Macqueen has written these characters, audiences discover it’s not that simple. “You find yourself asking ‘Who’s caring for whom? Who’s doing what for whom?’ I think one of the things that’s so truthful about this is that it keeps those questions alive.” There comes a time, said Firth, when people go through a desperate panic realizing they can’t control everything.  “We can’t control our destiny,” said Firth “We can’t control the people we love. We can’t control our relationships. Thing do change. They come to an end and then we all die. All of that is inevitable.”