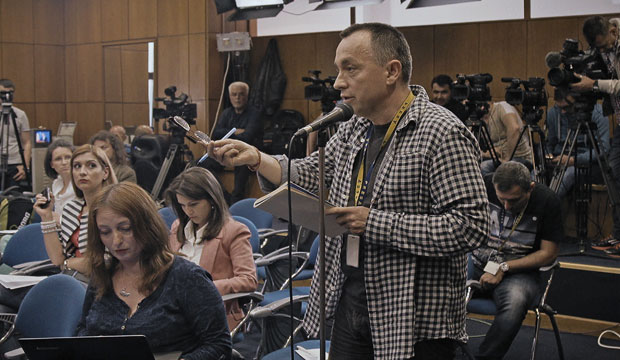 “Collective” made history in the 2021 Oscar nominations when it made the cut for Best International Feature and Best Documentary Feature. It’s only the second film ever to earn nominations in both of those categories, following Macedonia’s “Honeyland,” which achieved that unprecedented double play just last year. But “Honeyland” didn’t win either category: International Feature went to “Parasite,” while Documentary Feature was awarded to “American Factory.” So could “Collective” make further history by winning both awards?

The Romanian film is a hard-hitting investigative doc in which journalists uncover a stunning network of bribery and corruption in the nation’s health care institutions following a deadly nightclub fire. Several died immediately due to the fire, but even more died in the days and weeks that followed due to inadequate care and unsanitary hospital conditions. The film might appeal to the same voters who picked “Spotlight” (2015) for Best Picture, and of course Best Documentary Feature has often honored exposes, including “Inside Job” (2010), “Citizenfour” (2014) and “Icarus” (2017) in the last decade. But no documentary has ever won Best International Feature.

According to the combined predictions of Gold Derby users as of this writing, “Collective” is an underdog in both categories, but it has the potential to upset. For Best Documentary, it ranks third with 4/1 odds and support from one our Editors, Rob Licuria (“Time” is the current favorite to win there). It also gets 4/1 odds for International Feature, where Expert Tim Gray (Variety) thinks it will upset the front-runner, “Another Round.” So history is doubly within reach for the film, especially with its themes of health care and political corruption, which feel especially relevant after a year of COVID that has had such a profound effect on the awards the film is now competing for.