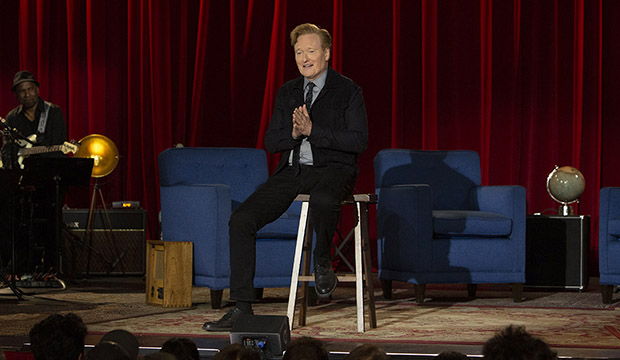 Since he bid adieu after 28 years as a late-night TV host this past June, people have been stopping Conan O’Brien on the streets telling him “’Well, congratulations on your retirement.’ They have no idea I’m as far from retired as you could possibly imagine.’’ In fact, he seems busier than ever. During a fun Variety Zoom conversation to promote the Emmy nomination for his TBS series “Conan” in the variety talk series category, the lanky self-deprecating O’Brien ticked off everything he’s doing.

“First of all, we started doing podcast just a couple of years ago I started on a whim,” he noted. “There’s no polite way to say it, it just blew up. It became a thing. It’s just been a fantastic experience because I spent 28 years honing these interview skills and then suddenly, I could use it but in a completely different format.” And in a format where he doesn’t have to stop his interviews for commercials and has complete creative control. He also hopes to do his acclaimed travel specials once the pandemic is over. And he’s also signed with HBO Max to do a weekly series “where I can focus on things that I think I do best and not have to feed the monster. I think this could be really fun.”

O’Brien just can’t stop doing things. “I love making stuff,” he explained. “I think I’m always going to love making stuff. If you completely take away my ability to try and make funny things for people on television or any kind of multimedia, I’m going to put together a little puppet show and do it in my backyard for squirrels. I love it. My wife and kids are always saying ‘You are doing this stuff all the time.’ If I bump into people outside a restaurant, I’ll start doing improv with them if they’re up for it. So It’s probably a sickness, but I really love doing it.”

The first call O’Brien received after “Conan” ended on June 24 was from his idol, the legendary comic/actor Bob Newhart.  “He said, ‘I can’t believe you did 28 years of that,”’ recalled O’Brien.  “He said, ‘I substituted for Johnny Carson 80 times and it was the hardest thing I ever did. I can’t imagine doing that for 28 years.” O’Brien pointed out to Newhart that he never did it as well as Carson, “so my burden was not as heavy. But still the idea was that it was nice to get a call from this incredible legend and hero and who understand what a task that is. So, if there’s a chance now to move onto different ways of being creative and getting comedy out there, I’ll try it.”

When O’Brien, who was then a writer for “The Simpsons” and a virtual unknown, was chosen to replace David Letterman on NBC’s “Late Night” franchise in 1993, the format was very established. “There were very few shows, and it was such an intense feeling of ‘Well, you’ve got to climb at the top of Mount Rushmore and try and survive there and see if you can position yourself in that role somehow,’ which was impossible, and I still think it is impossible.”

When he began “Late Night” he wanted to do “a lot of strange anarchic, weird things and we did, but there was no question that we were going to go with all the conventions because that is what you did. You needed those things. Those were such a part of the fabric.” And he loved having a desk, an old “tiny microphone, a curtain that I came out behind. I loved having the Max Weinberg Seven. I loved having a sidekick [Andy Richter]. I loved all those conventions.”

O’Brien wanted the show outwardly to look like a classic Carson “Tonight Show” or any classic series from the 1960s, “but then I wanted the material, the content of it to be subversive and completely strange and anarchic. I think that held out to be true. I think that held out to be a good formula.” But the late-night landscape is vastly different now. There are more series. And people can stream episodes at any time of day. “There’s a different expectation now, I think, people can get creative as they want to.”

O’Brien explained his comedy style comes from being from a large Irish Catholic family. “I was the middle child and self-deprecation was really a way to survive, sometimes physically to survive. But for the most part making of yourself was a defense mechanism. Make fun of yourself before someone can make fun of you.” On his first episode of “Late Night” on Sept. 13, 1993, O’Brien decided to mock his attempt to do a late-night series. NBC had been “desperate for me to avoid any mention of Letterman because that had ended badly and there were hard feelings. So, the No. 1 note that they had was ‘just don’t mention Letterman on your first show.’”

Of course, O’Brien did the opposite. The filmed opening found him walking to the studio with people telling “You better me as a good as Letterman.” ““I have a big dopey grin like ‘No problem.’ Then we get to the point where I am confronted by a horse. And then Tom Brokaw confronts me in the hall [at NBC]  and says, ‘You better be as good as Letterman,’ frowns at me and crunches a saltine in his hand, which was still one of the funniest things I’ve ever seen. Then I walk into my dressing room. I’m whistling and I start to make a noose.” O’Brien recalled that was the “first glimpse people would have of me, but I wanted them to see somebody who wasn’t afraid to address the white elephant in the room which was ‘I’m over my head. I’m inexperienced. I probably shouldn’t be here.’ So, shine a flashlight on that. Because that’s my sense of humor, I’m still doing that kind of stuff 30 years later.”