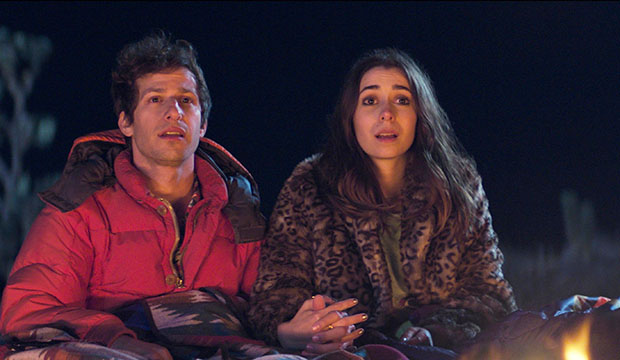 Just over a month ago Cristin Milioti was ranked outside the top 10 in our Golden Globe predictions for Best Film Comedy/Musical Actress. Since then the “Palm Springs” star has surged into sixth place, inching towards her first Globe nom for her breakout lead performance opposite Andy Samberg in the hit Hulu film. Milioti’s late groundswell of support could indicate that the Grammy-winning actress will land among the field of five nominees announced by the Hollywood Foreign Press Association on Wednesday.

With 16/1 odds, Milioti currently has seven experts predicting her to reap her first bid for playing Sarah Wilder, a distraught woman who bonds with a man named Nyles (Samberg) at her sister’s wedding. On the verge of a drunken affair, Nyles wanders into a mysterious cave, from which he cautions Sarah to stay away. Ignoring his warning, Sarah follows him in and gets sucked into a vortex that sends her into a loop, continuously repeating one of the worst days of her life alongside Nyles.

SEE ‘Palm Springs” Cristin Milioti: ‘It felt like I was a kid again’ [EXCLUSIVE VIDEO INTERVIEW]

“Palm Springs” appears to be strong across the board, which is good news for Milioti and could be the reason she’s seen a late surge in our odds. The film is expected to earn a bid for Best Comedy/Musical Film and Samberg is considered a potential threat to win on the men’s side, ranked second only behind Sacha Baron Cohen in “Borat Subsequent Moviefilm.”

Since the film’s release, Milioti has received rave reviews for her hilarious, heartbreaking performance. Film critic Brad Newsome of the Sydney Morning Herald writes, “Milioti brings a sublime blend of vulnerability, steel and unpredictability.” Katie Smith-Wong of Flick Feast says, “With Samberg and Milioti stealing the show on and off the dance floor, it is essentially ‘Groundhog Day’ with piña coladas.”

To earn her first Golden Globe nom, Milioti will have to sneak in over one of the current predicted five. Meryl Streep is the odds-on favorite to win for “The Prom,” with 4/1 odds. Michelle Pfeiffer in “French Exit” (4/1 odds), Maria Bakalova in “Borat: Subsequent Moviefilm” (9/2 odds), Rashida Jones in “On the Rocks” (13/2 odds) and Anya Taylor-Joy in “Emma” (13/2 odds) round out the top five. Last year’s champ was Awkwafina for her turn as Billi Wang in “The Farewell.”