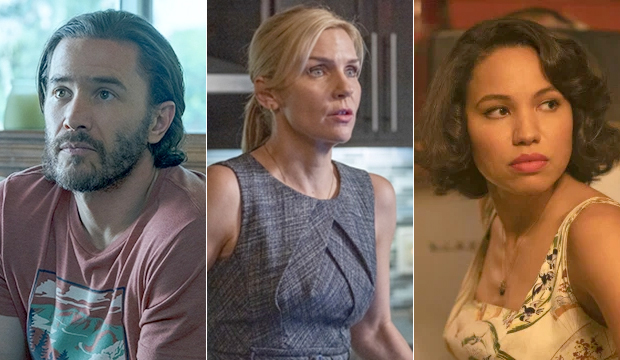 The nominations for the 11th annual Critics’ Choice TV Awards were unveiled on January 18, and our editors have a LOT to say. Scroll down to see our various hot takes, including what we thought about all of the love for “Ozark,” “Better Call Saul” and “Lovecraft Country.” To recap, Netflix topped all networks with 26 nominations, followed by HBO at 22 (plus a pair for HBO Max). The two television shows with the most bids are “Ozark” and “The Crown” at six apiece, with “Lovecraft Country,” “Mrs. America,” “Schitt’s Creek” and “What We Do in the Shadows” coming in at five each.

These awards, which are voted on by members of the Broadcast Television Journalists Association (BTJA), recognize the best of the small screen for the 2020 calendar year in the categories of drama series, comedy series, limited series, TV movies, talk shows, comedy specials and short form series.

Winners will be revealed alongside those for the movie awards on a live telecast on the CW on March 7. (The film nominations will be announced February 7.) Gold Derby’s predictions center is now open for the Critics’ Choice TV Awards, so login right now and start making your predictions.

Here are the reactions from Gold Derby’s editors and contributors:

DENTON DAVIDSON: The Best Comedy Supporting Actress category will ensure someone goes home with their first Critics’ Choice Award. While none of the six nominees have won before, Lecy Goranson‘s nomination for “The Conners” was a particularly welcome surprise. After playing Becky Conner for over 30 years, this is Goranson’s first nomination from a major awards show. Her top-billed co-stars throughout the years, including Roseanne Barr, John Goodman, Laurie Metcalf and Sara Gilbert have all reaped multiple nominations or wins. Finally it’s Goranson who has been highlighted after three decades.

MARCUS JAMES DIXON: The critics have always been nice to “Better Call Saul,” but this year they outdid themselves with a series-high four nominations for series, actor (Bob Odenkirk), supporting actor (Jonathan Banks) and supporting actress (Rhea Seehorn). Just like at the Emmys, “BCS” has yet to win a trophy at the Critics’ Choice Awards … might we suggest ending that tradition this year with a well-deserved triumph for Seehorn?

LUCA GILIBERTI: The Emmys did a great job honoring “Ozark’s” stellar third season with 18 nominations, but the critics did an even better one by finally recognizing Tom Pelphrey and Janet McTeer. The show as a whole blew up with six citations — the others being for series, actor (Jason Bateman), actress (Laura Linney) and supporting actress (Julia Garner) — but will it do better than it did at the Emmys, where Garner just barely saved it from going 0 for 18? It’ll have to duke it out with its Netflix companion “The Crown,” which also nabbed six citations and is up against it in every single one of its categories. But, honestly, who doesn’t want to see the Byrdes and the British royal family go head to head?

KEVIN JACOBSEN: What’s up with snubbing stars in shows they otherwise watched and embraced? “The Undoing” was nominated for series, Hugh Grant and Donald Sutherland but nothing for Nicole Kidman? “Bad Education” nominated for Best TV Movie yet Emmy nominee Hugh Jackman wasn’t worthy enough? “The Good Lord Bird” gets two supporting nominations but no Ethan Hawke in lead? Alex Newell acknowledged for his scene-stealing work in “Zoey’s Extraordinary Playlist” but not Zoey herself, Jane Levy?! I’m all for spreading the wealth but there are some odd inconsistencies here.

DANIEL MONTGOMERY: Is all the love for “Lovecraft Country” a sign of things to come? Despite the social relevance of the HBO series (it deals with racism during the Jim Crow era), it’s a gory horror series with witches and monsters, which might have been a tough sell to snobby awards voters. But not only did the show make the cut for Best Drama Series, it showed up in all four acting categories. Maybe this will give it an extra boost going into Golden Globe and SAG Award nominations.

TONY RUIZ: I’ve been saying it for years — declarations about the death of the multi-cam sitcom has been greatly exaggerated. Apparently the critics took notice this year. They showered a ton of love upon CBS’s “Mom,” with noms for Best Comedy, Best Comedy Supporting Actor (William Fichtner) and Best Comedy Supporting Actress (Jaime Pressly). With all that love, leaving out the show’s title character and Emmy favorite Allison Janney seems particularly egregious. There was also a surprising but welcome nomination for Lecy Goranson (“The Conners”) in the Comedy Supporting Actress category. And let’s not forget the legendary Rita Moreno earning her fourth nomination for the criminally underappreciated and now-cancelled “One Day at a Time.”

PAUL SHEEHAN: Glad that the CCA didn’t forget “Schitt’s Creek” even though it wrapped up its six-season run last year. I don’t think this Canadian comedy will sweep these awards the way it did the Emmys but I am delighted that it got invited to the party. And am thrilled for Kaley Cuoco, who was woefully unappreciated for her work on “The Big Bang Theory,” for being nominated for her pet project “The Flight Attendant.”

JOHN BENUTTY: After underperforming on the circuit last year for season 3, “The Crown” makes a major resurgence in the awards race with a series and FIVE acting nominations for season 4, basically maxing out on its potential here. Josh O’Connor as Prince Charles and Gillian Anderson as Margaret Thatcher are two powerhouse performances that shouldn’t be underestimated at next year’s Emmys. Don’t forget, Claire Foy also won the Emmy for her second season on the show despite never winning the Critics’ Choice. Can O’Connor, Olivia Colman or Tobias Menzies do the same?

SAM ECKMANN: Two Broadway shows committed to film, “Hamilton” and “What the Constitution Means to Me,” scored Best TV Movie nominations. Yet none of the actors from these titles were nominated. There may be hesitancy to nominate performances that were created for the stage. I mean, how does one watch “Hamilton” and NOT nominate Renee Elise Goldsberry for Supporting Actress? If there is a bias toward this type of performance, we may be overestimating the “Hamilton” actors at the Golden Globes.

DAVID BUCHANAN: “The Good Fight” continues to go criminally unrecognized by almost every awards body, but its support thankfully stays strong with Critics’ Choice with nominations for Best Drama Series and Christine Baranski. Although cut short due to the pandemic, its fourth season was shaping up to be one of its best and it earned its noms for its brilliant, bonkers Season 4 premiere alone. And despite what some critics called a lesser installment, nominations for “Fargo” stars Chris Rock and Glynn Turman singled out two of the season’s acting highlights. If they liked them, though, how could they snub the true breakout star Jessie Buckley?