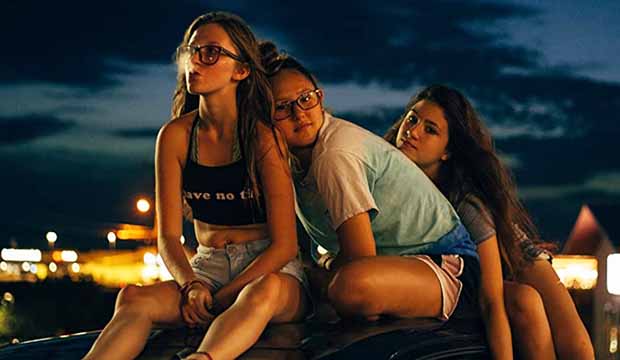 It’s hard out there for a teenage girl. Especially for Autumn, Aaloni and Brittney, BBF’s living in small, tired Texas town, in the award-winning observational documentary “Cusp.” These 15 and 16-year-olds spend the summer hanging out together in their bedrooms watching “Grey’s Anatomy,” going to the local fast-food restaurants, smoking blunts, swimming, drinking, partying. And at one point, one attempts to pierce their friend’s nipple. But these girls have grown-up fast. They have been victims of rape and abuse.

The Washington Post’s Ann Hornaday noted that the first-time filmmakers Isabel Bethencourt and Parker Hill have made a “portrait that feels simultaneously specific and universal-a portrait of the inchoate desires and heedlessness that have always been a part of adolescence, as well as a snapshot of a particular point in time when such impulses feel breathtakingly high.” And dismaying, especially when the filmmakers “train their cameras on the girls’ relationships with the (usually older) boys in their lives, their interactions ranging across a toxic spectrum of dismissal and disrespect to outright assault. The most stunning sequence in ‘Cusp’ is set at a party where the soft-spoken Brittney is trying to bring attention to the rape of a member of the group’s social circle; she’s reflexively drowned out….”

“Cusp” premiered at the Sundance Film Festival this year, winning the U.S. Documentary Jury Prize for Emerging Filmmaker, and has qualified for Oscar eligibility in the Best Documentary Feature category. Film Independent recently hosted a Zoom conversation with the two filmmakers who don’t look much older than their subjects.

Bethencourt and Hill met and became friends when they were at NYU. “I started in cinematography and came up through that visual path,” said Bethencourt. “I started photography at a young age and got really drawn to kind of observational films and kind of the humor in observation-seeing people in their natural environments and what we can learn about people through observation.  That kind of led into being interested in directing. After college, I was freelancing as a cinematographer for documentaries and narrative projects. And then felt ready to tackle a project of my own.” “Cusp,” she said, basically landed on her lap.

Hill spent most of her time in NYU writing and producing. But once she graduated, she  gravitated to photography. “It really changed my whole world,” said Hill. “It changed the way I looked at things, changed who I was as a storyteller.” A friend of hers, who was producing commercial, was looking for production assistants who could return an RV from Montana to Austin, TX ,in just three days. “It was not like a leisurely trip,” she noted. She reached out to Bethencourt to join her because, just as Hill, she is interested in girlhood photography. “We were also both fascinated with the American West and this idea of American teenagers and girls,” Hill explained. “So, the whole trip we were kind of like looking to photograph the American teenage experience. We would go to a skate park or a burger joint in different town.”

The night before they were reach Austin, they were driving as Hill described it-“through the middle of nowhere” Texas. “It was like 2:30 in the morning; we pulled into the gas station and four girls in a pickup truck come barreling in,” recalled Hill. “They were barefoot, singing, cracking jokes and music was blasting.” In short, the epitome of a free summer night without a care in the world.  Hill recalled they were bouncing with such energy, “we asked to take their photo and they ended up inviting us back to their friend’s house. We were so interested in their energy, their freedom. They were just so carefree. They had a lot to say about their lives, who they were and what it was like to be them.”

Brittney was one of the girls in the car; they met Autumn and Aaloni when they went to the friend’s house. Bethencourt and Hill decided to return to Texas to make a short film about the teenagers.   “I think we were so struck with kind of the balance between their teenage freedom and their youth and exuberance and their very adult way of talking about their lives,” said Hill. After filming the trio for 10 days, they realized there was a lot more going on with the friends. “We had a bunch of interesting scenes, but it didn’t feel like it quite added up to anything yet,” said Hill. “We decided to go back”.

They returned in March 2019 and shot on and off until that August. The filming process evolved, said Bethencourt. “We were doing whatever they were doing that day. We were down for whatever.” The scope also evolved from the short film. “The first trip we were following boys and girls,” said Bethencourt.  “That’s kind of how we had access in some of those party scenes that are in the film. And the more we learned about what was actually going on beneath the surface and some of the darker subject matter the girls were dealing with,” they were never in the same room with the boys “after learning certain things.”

In fact, said Bethencourt, “the order of how everything got filmed, I would say got girlier and girlier. It’s about trying to understand how you’re at a party and you might be scared and then the next night you’re braiding your friend’s hair and trying to go to MacDonald’s. Both things are true for a teenage girl.” Their subjects quickly became used to the filmmakers. “On one of the trips,” recalled Bethencourt, “the first couple of days they put on full faces of makeup. Then they stopped pretty quickly and were like ‘Whatever. You’re going to be here all the time. I’m not doing this every day.”’