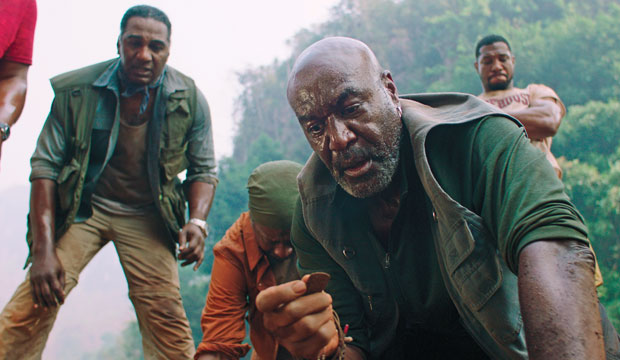 Since 2008, the Screen Actors Guild has honored the oft unsung heroes of the acting industry with the Best Film Stunt Ensemble award. The competitive prize is given annually in recognition of the important work done by stunt performers and coordinators in the making of feature films. This year’s winner will be revealed during the 27th SAG Awards ceremony, airing April 4 on TBS and TNT. The 2021 nominees are “Da 5 Bloods,” “Mulan,” “News of the World,” “The Trial of the Chicago 7″ and “Wonder Woman 1984.”

These nominated stunt crews represent perhaps the most eclectic group of films in the category’s history, ranging in genre from western to courtroom drama, with the usual superhero and war films in between.

In addition to facing off here, “Da 5 Bloods” and “The Trial of the Chicago 7” are both up for Best Ensemble Cast, marking the first time that two films have ever competed against each other for both awards. Each film also earned a Best Supporting Actor nomination (for Chadwick Boseman and Sacha Baron Cohen, respectively). The other ensemble nominees are “Ma Rainey’s Black Bottom,” “Minari” and “One Night in Miami.”

SEEWhen are the SAG Awards in 2021? What to know about the Screen Actors Guild Awards

This year’s stunt lineup is also the first to include two female-led films: “Mulan” and “Wonder Woman 1984.” The latter is the sequel to a previous winner in the category, 2017’s “Wonder Woman.” The fifth slot is filled by “News of the World,” the third western ever nominated for the award following “Cowboys & Aliens” in 2012 and “The Ballad of Buster Scruggs” in 2019. Having garnered an additional bid for Best Supporting Actress (Helena Zengel), it is also the third western to compete in multiple SAG categories after “No Country for Old Men” in 2008 and “True Grit” in 2011.