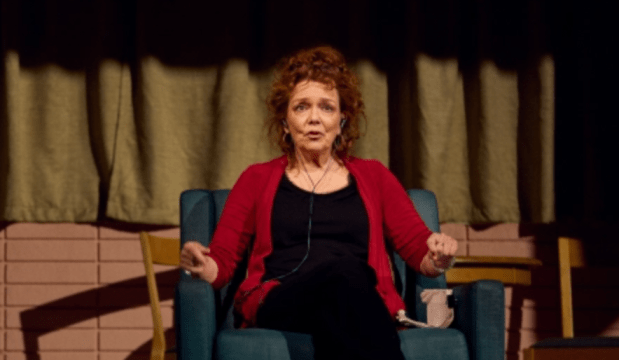 Last week, “Is This a Room” opened on Broadway to rave reviews as one half of a repertory production that also features Tony-nominee Lucas Hnath’s “Dana H.” This companion piece, of sorts, opened at the Lyceum Theatre on Oct. 17 to similar critical praise. Although the two productions do not share a common playwright or even overlap in cast, they are kindred spirits as both are based on real-life transcripts: “Is This a Room” stages the verbatim text of a real FBI interrogation, and “Dana H.” consists of the audio from an interview of a woman recounting her five-month abduction.

In “Dana H.”, Deirdre O’Connell portrays the title character of Dana Higginbotham, the mother of playwright Hnath. In 1997, Higginbotham was kidnapped by a white supremacist and former patient at the psychiatric ward where she worked as chaplain, and she could not escape him or his abuse for five months. Hnath gives dramatic form to hours of interviews between Higginbotham and artistic director Steve Cosson, and the play consists of O’Connell lip-synching to those recordings for nearly an hour and a half, almost uninterrupted.

Jesse Green (New York Times) calls “Dana H.” “profoundly disturbing” and a Critic’s Pick. He lauds O’Connell for “brilliantly pulling off one of the strangest and most difficult challenges ever asked of an actor,” calling it an “astonishing feat.” Green also celebrates director Les Waters’ “nerves-of-steel staging,” and meditates on the play’s “wonderfully complicating” exploration of truth, doubt, and the ability of recount one’s traumatic past.

Helen Shaw (Vulture) similarly praises “Dana H.” as “harrowing and unmissable,” a “breathless, brilliant show.” In this rich return of live theatre, Shaw calls the play “the unlikely crown jewel in this bizarre Broadway season” and “the smash of the season.” Shaw’s admiration of O’Connell stands out, as she calls the performer a “channeling,” writing, “You sometimes forget the voice doesn’t belong to the body in front of you, but when you do remember, her performance takes on a still deeper intimacy.” She concludes by writing, “‘Dana H.’ raises a hundred questions about authorship, violence, voice” and “seizes you… months later, you will still be in its thrall.”

SEE ‘The Lehman Trilogy’ arrives on Broadway ‘gorgeous and intoxicating,’ a ‘captivating’ but dense financial epic

Although “Dana H.” shares a bill with “Is This a Room,” the Tony nominating committee will likely deem the shows separate entities in the race for Best Play. Their pairing stands apart from prior repertory productions that went on to earn Tony nominations – “Harry Potter and the Cursed Child, Parts One and Two” (2018), “Angels in America: Millennium Approaches and Perestroika” (2018), “Wolf Hall: Parts One & Two” (2015), and “Sizwe Banzi Is Dead and The Island” (1975) – because they do not share a playwright, a cast, or even depict a continuing story. “Dana H.” joins a crowded contest of new dramas, which includes “Pass Over,” “Chicken & Biscuits,” “Is This a Room,” “Thoughts of a Colored Man,” “The Lehman Trilogy,” “Clyde’s,” “Skeleton Crew,” “The Minutes,” and “Birthday Candles.”

Though it is too early to rule out a Best Play nomination for a show with such strong notices, it seems more likely that “Dana H.” will be remembered in the Actress category for O’Connell. The show relies on her uncanny performance, a physical and psychological feat that will no doubt stun the Tony nominating committee. O’Connell will have no shortage of competition from the likes of Emily Davis (“Is This a Room”), LaChanze (“Trouble in Mind”), Uzo Aduba (“Clyde’s”), Phylicia Rashad (“Skeleton Crew”), Sarah Jessica Parker (“Plaza Suite”), Debra Messing (“Birthday Candles”), reigning Best Actress champion Mary-Louise Parker (“How I Learned to Drive”), and Ruth Negga (“Macbeth”). Even so, O’Connell delivers an utterly unique turn that serves as a high point of a long and celebrated career as a New York stage actress.