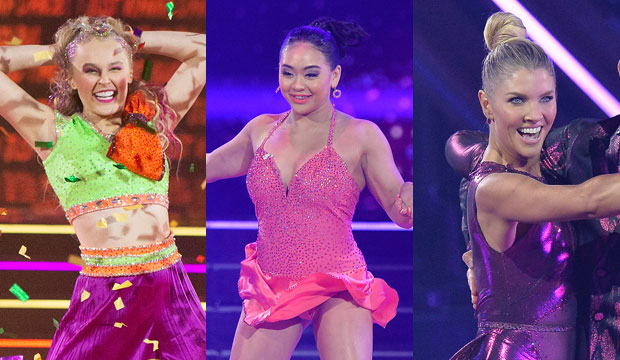 There were a number of surprisingly strong performances during the first night of “Dancing with the Stars” season 30 considering this was the stars’ first time in the ballroom. So there was no shortage of options when it came to choosing the MVP of the premiere. But the fans we polled after Monday night’s show didn’t quite agree with the judges on who was the best of the best. Scroll down to see our complete poll results.

It was crowded at the top of the leaderboard. Derek Hough, Len Goodman, and Bruno Tonioli gave sevens to gymnast Suni Lee, YouTube personality JoJo Siwa, and “The Talk” co-host Amanda Kloots. It would have been a three-way tie at the top, but Carrie Ann Inaba gave sevens to Lee and Kloots, but an eight to Siwa. That put Siwa a point over her competitors, though it came despite her partner Jenna Johnson losing her balance in the middle of their routine.

Siwa’s quickstep was energetic and infectious, and especially meaningful because it was the first ever “DWTS” routine by a celebrity competing with a same-sex partner. But while our readers agreed on the top three performers of the night, they differed slightly on the order. Lee’s cha cha actually finished on top of our poll with 22.96%, though the judges thought she was a little too reserved. Siwa did finished close behind with 20.62% of the vote, with Kloots’s tango just as close behind that with 18.29% of the vote.

Spice Girls singer Melanie C finished fourth with the judges and fourth with our readers as well with 7.78% of the vote. Perhaps surprisingly, though, Peloton trainer Cody Rigsby finished fifth in our poll with 5.84% despite tying for eighth in the judges’ scores. Our readers also liked basketball star Iman Shumpert, who was sixth in our poll (5.45%) but way down in 14th in the judges’ score. Perhaps that suggests fan bases that could help carry those two through the competition. Check out the complete results below.

SEE‘Dancing with the Stars’ video slugfest: Who’s the front-runner to win after the season 30 premiere? [WATCH]