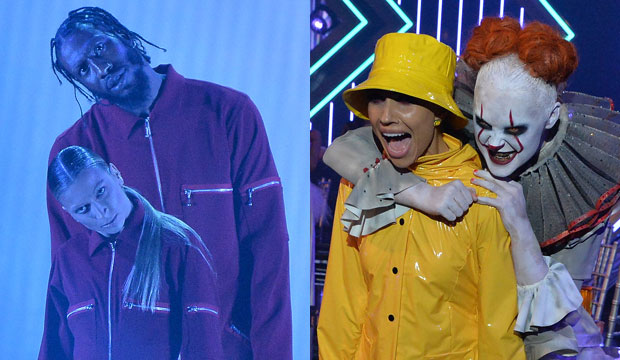 “Dancing with the Stars” celebrated “Horror Night” on Monday and there were two perfect dances: pop star JoJo Siwa‘s “It”-inspired jazz routine and basketball player Iman Shumpert‘s “Us” contemporary dance. Both got 10s across the board from judges Carrie Ann Inaba, Len Goodman, Derek Hough, and Bruno Tonioli. But the fans we polled had a clear favorite. Scroll down for the complete poll results.

SEEYes, Lupita Nyong’o loves Iman Shumpert and Daniella Karagach’s ‘Us’-themed ‘Dancing with the Stars’ routine as much as you do

It was no surprise that Siwa gave a great performance as Pennywise the homicidal clown from the Stephen King novel and the films it inspired. She had gotten the season’s first perfect score the previous week when celebrating another movie, “Grease.” But Shumpert had been one of the lower scoring celebrities of the season, so few anticipated that he would not only share the top of the leaderboard with Siwa, but that he would follow her as just the second celeb this season to get all 10s from the judges.

And perhaps that element of surprise is why our readers were so enthusiastic about it. More than 40% of poll respondents thought Shumpert gave the best performance of the night, playing a sinister “tethered” character from Jordan Peele‘s acclaimed film. Compare that to Siwa who ranked second in our poll with 22.64% of the vote. And while Siwa is still the favorite to win the Mirror Ball Trophy according to our odds, Shumpert has jumped from 100/1 odds to 16/1 odds as of this writing. Maybe we’re looking at a historic finale where the show’s first ever same-sex couple battles the potential first basketball star to win the competition.