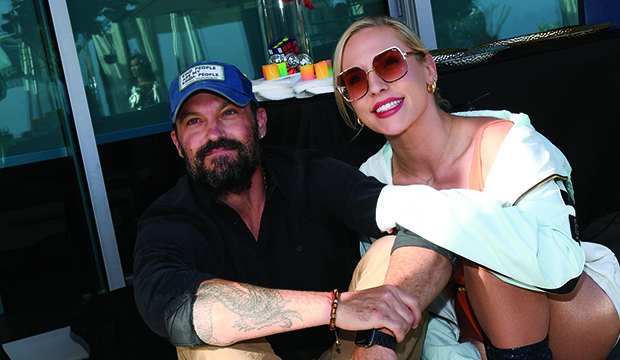 Brian Austin Green isn’t the first “Beverly Hills, 90210” star to compete on “Dancing with the Stars,” but he is the first one to simultaneously date one of its pros. Green, one the Season 30 competitors, and Season 27 champ Sharna Burgess have been dating for nearly a year and had joked about him possibly doing the show.

“When we first started dating … we used to laugh about the fact that it would probably just never happen. It just wasn’t on our radar at all, either one of us,” Green told reporters after the cast was announced Wednesday, according to Us Weekly. “But [then] the offer came in for the season. And the more we just kind of talked about it in general, we realized together that this is a really unique opportunity.”

The actor, who competed on “The Masked Singer” last year as Giraffe, sees this as an “amazing opportunity” to learn about his significant other’s craft. “I really look at this as a really cool way of understanding who she is professionally and [experiencing] something that she’s been passionate about and done her entire life,” he continued. “It’s really a cool way of getting to know her. … I don’t know how much longer the show will be on. I don’t know how many more opportunities I will have for something like this. It was the perfect storm. Everything just matched up.”

The pairings won’t be revealed until the live season premiere, but it’s widely expected that Green and Burgess will be partners. A source told Us Weekly last week, as rumors circulated about his casting, that it’s “likely” the lovebirds will dance together. And with strict COVID-19 protocols to follow, it’d be convenient since they could have their own at-home bubble (married pros, once again, have to live separately during the season). “Dancing” has also pulled this stunt, if you will, before: Julianne Hough was paired with her then-boyfriend, country singer Chuck Wicks, in Season 8 in 2009. (On the other hand, “Shark Tank” star Robert Herjavec and Kym Johnson started dating — and have since married and had twins — after they competed together in Season 20 in 2015.)

While Green can’t say who his partner is, he did share that Burgess has been “extremely kind and helpful” and a “huge cheerleader” as he’s started rehearsals. “She’s really given me a lot of pointers and helped me understand just the work that is in store for me — what I’m going to have to commit to in doing this well,” he said. “I’m still nervous about the first show, of course, because it’s live. I haven’t had an opportunity to do much live work before, but I know once I get that out of my system and that’s done, then I’ll know what my biggest fears are and what I have to worry about. And then there won’t be any more surprises after that.”

Burgess is obviously keeping her partner’s identity on the DL as well, but in an Instagram Story on Wednesday, she asked fans to vote if they’d rather see her and Green as teammates or rivals. In subsequent Stories, the couple are driving (on their way to rehearsal?) as Green shares some of his excitement and nerves about doing the show.

“I am excited that you get to experience a show that I have loved for so long and that, you know, hopefully those hips can move,” Burgess teased.

“I dunno. These hips feel old,” he replied.