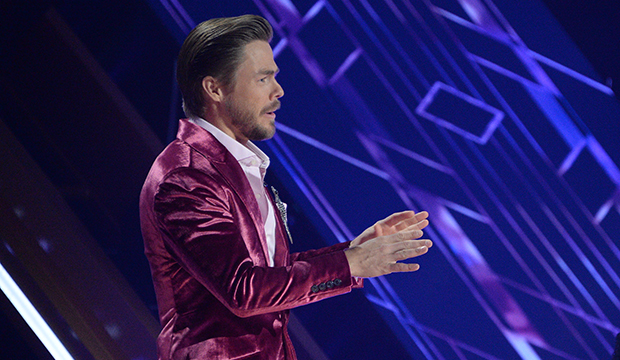 Derek Hough has a record six Mirrorball trophies, two Emmys for his choreography on “Dancing with the Stars” and is widely regarded as one of the series’ best pros ever, but he felt like a fraud in his early seasons.

“I definitely look back at my approach to the show. In my earlier seasons, I was nervous and I was uncertain. I was kind of faking it, to be honest with you,” Hough told Jana Kramer, a “Dancing” alum, on her “Whine Down” podcast. “I wasn’t really a teacher or choreographer. People used to say, ‘Oh, you’re a good choreographer.’ I’m like, I never really looked at myself in that way. That made me fearful and afraid.”

Hough made his “Dancing” debut in Season 4 in 2007, not as a pro but as a guest instructor helping out his sister Julianne Hough and her partner Apolo Anton Ohno, who would go on to win the season. He was promoted to pro in Season 5, finishing in fourth place with “Beverly Hills, 90210” star Jennie Garth.

Hough said he “definitely would get more frustrated easier” in his early seasons. Any die-hard “Dancing” fan will recall his meltdown after he and Shannon Elizabeth were criticized for the lack of hip action in their rumba in Season 6. “You’re calling out our hip action? What about the heel leads, the feet coming off the floor, the horrific, demented lines people are making out there? And you’re giving them 9s and 10s. Are you kidding me?” he fumed in a talking head (remember those on the results shows?).

“I look back at some of my earlier seasons, thinking, ‘Man, I wish I knew then what I know now.’ And how I shifted my approach to teaching and coaching, and I probably could have gotten more out of [my partners] with a better teaching approach, which I eventually learned and created,” Hough told Kramer. “I wish I was better earlier on and I could have given them a better and chance and experience.”

Hough won his first Mirrorball with Brooke Burke in Season 7 and followed up with victories with Nicole Scherzinger (Season 10), Jennifer Grey (Season 11), Kellie Pickler (Season 16), Amber Riley (Season 17) and Bindi Irwin (Season 21). A 17-time pro, he never finished lower than sixth place, which was his placement with Marilu Henner on his final season, the 23rd installment, on which Kramer competed.

After moving on to NBC’s “World of Dance,” Hough returned to “Dancing” last season as a judge, filling in for Len Goodman, who was unable to travel due to the pandemic. He also performed last season, earning another choreography Emmy nomination this year (he has a second nomination for his choreography on “The Disney Holiday Singalong”). Both men will be judges on the upcoming 30th season alongside Carrie Ann Inaba and Bruno Tonioli.

“It’s definitely a lot easier, that’s for sure. …. Dancing, of course, is harder,” he said. “However, I will say [judging is] a lot harder — when I was judging on ‘World of Dance,’ it was pre-taped, so we could ramble on and go off and go on and on and on. If you forgot to say something, you’re like, ‘Oh, let me say something really fast.’ Whereas on ‘Dancing with the Stars,’ it’s live. Once the time is up, that’s it. There are times when Bruno goes on one of his rants and there’s no time left, so Derek is like, ‘Good job.’ Thanks a lot, Bruno. But obviously being a coach and having been a teacher, I really want to give an actual note.”

Dule Hill ('The Wonder Years'): 'Everything in life is music' and is 'all a rhythm' [Exclusive Video…