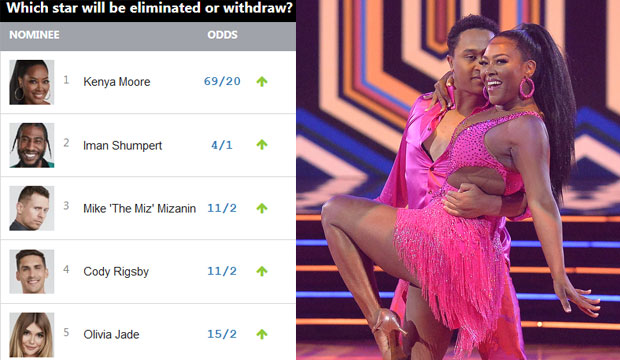 Kenya Moore has held on by the skin of her teeth on “Dancing with the Stars.” The “Real Housewives” alum was in the bottom two on “Britney Night” after judges’ scores and viewer votes were added together, but the judges decided to save her and eliminate Christine Chiu. Then she was in the bottom three for the double elimination on “Disney Villains Night,” but judges narrowly decided to save her over “Bachelor” star Matt James. Tonight is “Grease Night,” so can she dodge another bullet?

Not according to the combined predictions of Gold Derby users as of this writing. Most who have placed their bets here in our predictions center say she won’t be able to fight off another elimination, giving her leading 69/20 odds of being sent home. Throughout the season thus far she has received respectable scores for her dances; her judges’ average to date places her ninth out of 15 total contestants. So where she has come up short is in the votes from the viewing audience, which is tough to remedy unless you simply score so well for your dances that it can offset that deficit.

SEE‘Grease’ (Night) is the word: Olivia Newton-John is returning to ‘Dancing with the Stars’

Moore has a rumba on “Grease Night,” a sensual Latin dance style that’s not as showstopping as other, faster-paced routines. And the song she’s scheduled to dance to, “There Are Worse Things I Could Do,” isn’t as iconic as other cuts from that soundtrack like “Summer Nights” and “You’re the One That I Want.” So Moore will have to work that much harder to build up the goodwill of judges and fans.

But if she dances well enough and lands in the bottom two with a celeb the judges aren’t as fond of, that could be her saving grace, which may be why basketball star Iman Shumpert ranks second in our elimination forecasts with 4/1 odds. He hasn’t been in the bottom two yet, but his judges’ scores have slightly trailed Moore’s over the course of the season, so if he has a bad night the judges might choose to send him home instead. Who do you think will be the unlucky dancing school dropout?