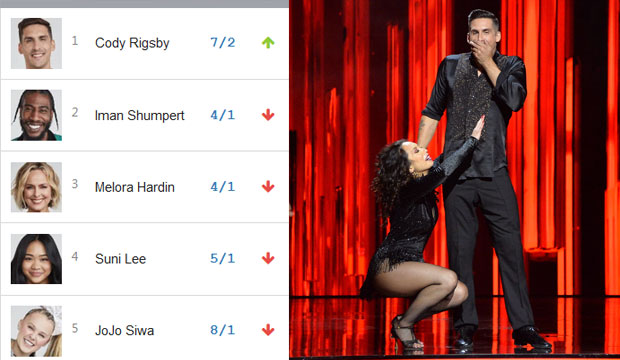 The “Dancing with the Stars” Semi-Finals are tonight, which means the show’s second double elimination in a row as the competition goes from its six remaining contestants to its final four. So who will make the final cut? “DWTS” fans have been predicting the results of tonight’s show for the past week, and their forecasts suggest there could be an all-female finale.

We think Peloton fitness instructor Cody Rigsby is the likeliest contestant to be sent home with 7/2 odds of elimination. He’s followed by basketball star Iman Shumpert with 4/1 odds. If those odds hold true, that would leave only women to compete for the Mirror Ball Trophy next week: pop singer and “Dance Moms” alum JoJo Siwa, Broadway performer and “The Talk” co-host Amanda Kloots, Olympic gymnast Suni Lee, and “The Office” actress Melora Hardin.

SEEDo-overs and yet another double elimination: See the ‘Dancing with the Stars’ semifinal dance slate

But are we underestimating Rigsby and Shumpert? They’re the bottom two celebs left in the competition based on their judges’ scores, but they’re also two of the only three celebs who have never been in the bottom two or bottom three when viewer votes have been added in (Kloots is the third). Hardin, Lee, and Siwa have all been at the bottom at least once this season thus far, which suggests that the men have significant, reliable fan bases voting to keep them in the competition.

However, just because you’ve never been at the bottom doesn’t mean your safe. Just ask Jimmie Allen. On “Janet Jackson Night” he got unusually harsh criticisms from the judges, which left him at the bottom of the leaderboard. He ended up in the bottom three for the very first time this season, and when it came down to him and Hardin, the judges voted to save her over him. Since Rigsby and Shumpert are the lowest-scoring celebs remaining, if either of them has an off night, it’s unlikely that judges will vote to save either of them. What do you think will happen?