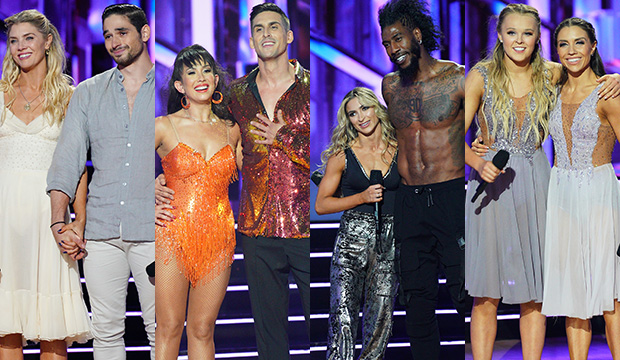 Is “Dancing with the Stars” Season 30 JoJo Siwa‘s to lose? The singer has been the favorite all season long, but as we’ve seen the past few seasons, that’s been more of a curse than a blessing. Siwa, Amanda Kloots, Cody Rigsby and Iman Shumpert will hit the hardwood one last time on Monday’s season finale for Mirrorball glory. They will perform twice, a fusion dance of two styles, and the freestyle, of course.

Who will win? Let’s break down the final four.

Amanda Kloots and Alan Bersten
For her: Consistency. Kloots has never been bad nor has she had a terribly off week. Hard not to feel like her past as a Broadway dancer and Rockette, performing day in and day out, isn’t a factor in that consistency even if the dance styles are completely different. And she just gave one of her best performances of the season in the semifinal with her contemporary tribute to her late husband Nick Cordero.

Needs to work on: Audience connection. This sounds weird to say on the heels of her emotional contemporary routine, but Kloots’ performances don’t really pop the way that of some of the other contestants, including those who’ve been eliminated, do. Since she’s always been a technically great dancer, Kloots hasn’t shown as much growth as some others, and there hasn’t been as much variety in her output either — she’s been dependably, reliably good, which is a double-edged sword because it could get you far (like the judges saving her over Suni Lee, someone who has shown growth and found her mojo the past few weeks), but if you don’t truly stick out in viewers’ minds, that’ll hurt when it comes to voting.

Why she might win: Again, she’s a great dancer! She has the second highest average score of the season, behind only Siwa. Fans might also rally after her bottom three appearance in the semifinal.

Cody Rigsby and Cheryl Burke
For him: A hardcore fanbase. Let’s be real: Rigsby is the weakest dancer left — he’d probably tell you that himself — but the #BooCrew has been there for him. They saved him during that dicey Week 3 when he and Burke were both stricken with COVID-19 and had to perform remotely, earning the lowest score of the night. And despite his comparatively lower scores since, he has never hit the bottom. He had the lowest score in the semifinal and there was an eight-point spread between him and Kloots — and she landed in the bottom three. And we all know from Bobby Bones what a devoted fanbase can do.

Needs to work on: Technique. Rigsby’s footwork and posture still leave a lot to be desired, and let’s not forgot how Derek Hough pointed out that their Argentine tango in the semifinal was basically Burke dancing around the Peloton instructor. It’s impossible to say how much their breakthrough cases of COVID have impacted each of them — and if they’re still feeling any lingering effects now — but let’s just say Rigsby has not improved as much as some others.

Why he might win: His fans. If he has the lowest score in the final and winds up winning, it’d be shades of Bones, except Rigsby is a better dancer.

Iman Shumpert and Daniella Karagach
For him: No disrespect to anyone else, but Shumpert has become the reason to watch “Dancing” every week ever since that instant classic “Us”-inspired routine on Horror Week. Expectations were low for the NBA champ since basketball players have an abysmal “Dancing” track record and he’s as tall as a skyscraper, but Shumpert, who arrived with strength and power, has improved tremendously since the first week and has proven to have impeccable musicality and showmanship. His and Karagach’s routines are arguably the most exciting to watch, just to see what daring feat they will do next. Karagach has turned what could’ve been a disadvantage — his height — into a secret weapon, and their fearless dances, which are also full of content, leave you speechless.

Needs to work on: The height difference will always be a thing, but Shumpert’s posture and frame were better in the semifinal. It definitely feels like things clicked for him after Hough, his redemption tango mentor, advised him to use his size to his advantage and dominate the floor — something, needless to say, he needs to keep up in the final.

Why he might win: Shump is the epitome of what the show is about: He is someone with no dance experience who learned and improved throughout the season, putting forth memorable, showstopping routines. An underrated aspect of his run is his partnership with Karagach — it takes an insane amount of trust in each other to do the mind-blowing lifts and acrobatics they pull off with such ease. Besides Rigsby, he is the only other person who has not hit the bottom this season, and it’s safe to say he’s been winning over new fans.

SEE Melora Hardin: ‘Dancing with the Stars’ judges are ‘almost making random choices’ with their scores

JoJo Siwa and Jenna Johnson
For her: The “Dance Moms” alum has been the best dancer all season, and the scores reflect that. Even though Siwa came in with dance experience like Kloots did and hasn’t drastically improved like Shumpert has, there’s been more versatility to her dances. Part of that is likely due to Johnson having to think outside of the box for their routines as they’re the first same-sex couple on the show. They’re a great match together and haven’t really faltered any step of the way that was in their control.

Needs to work on: It’s the little things for Siwa, like refining lines, that will go a long way. She’s shown she can rein in her frenetic energy when the dance calls for it, so it’s about polishing up finishes.

Why she might win: The season-long frontrunner winning would be the opposite of shocking. Siwa did land in the bottom two in Week 7, but she hasn’t been there since and that might’ve rallied the troops out of complacency to vote for her. And while it’s no secret that “Dancing’s” demographic leans conservative, a same-sex couple winning “Dancing” would be historic and meaningful in ways to the LGBTQ community beyond a shiny Mirrorball trophy.