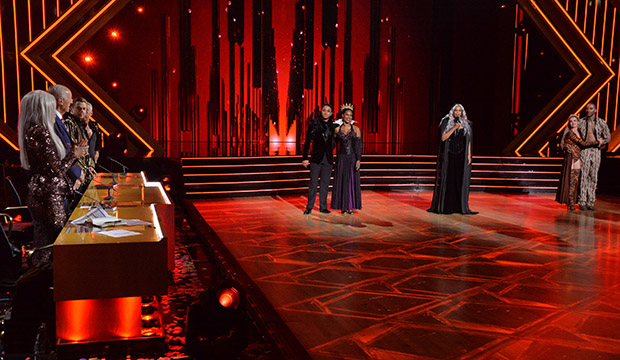 “Dancing with the Stars'” Disney Villains Night on Tuesday was villainous indeed as the show dropped a surprise double elimination on us — the complete opposite of past Disney Nights when we got non-eliminations via “Disney magic” — but the double was not the bad part. That would be the totally confusing way it went about explaining — or not explaining, rather — the judges’ votes. But don’t worry, we’ve got you covered.

After Brian Austin Green and Sharna Burgess were automatically eliminated in the bottom three with the lowest combined total of scores and votes, Matt James and Lindsay Arnold, and Kenya Moore and Brandon Armstrong faced the four judges to see who would stay and who would go. The judges’ vote has not been an issue in the past two seasons because there were three judges so there couldn’t be a tie in the end or in the past two weeks because Martin Kove and Britt Stewart were unanimously eliminated, as were Christine Chiu and Pasha Pashkov last week, which also only had three judges as Derek Hough missed the show after potential exposure to COVID-19.

But all four judges were back Tuesday, and James and Moore were close enough in ability and scores that could make it a tough decision — not to mention that the “Real Housewives of Atlanta” star had already survived the bottom two last week. Tyra Banks explained how the voting works — but not really because she kept saying that if the first three judges are tied, head judge Len Goodman would break the tie. A true choice of words since three is an odd number and, you know, you can’t have a tie. The first three judges were split as Bruno Tonioli and Carrie Ann Inaba saved James, and Hough saved Moore, which gave James a 2-1 edge. So if you weren’t paying attention, it looks like James was staying. But then Goodman voted to save Moore and the “Bachelor” alum was axed as the credits rolled.

Banks is an easy target to dunk on, but she’s not entirely at fault here because someone wrote those words for her to read. Words have meanings. Here, we’ll write a new script: “Each judge will vote to save one couple. As head judge, Len will vote last and his vote counts as two votes. Again, Len’s vote counts as two votes. That means if the first three are not unanimous, Len’s vote will determine who stays and who leaves.” You’re welcome.