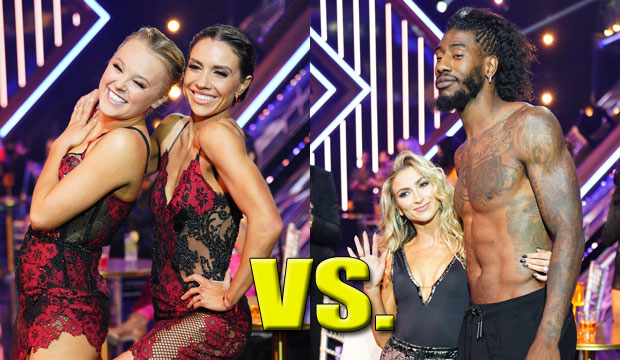 “Dancing with the Stars” wraps up its landmark 30th season tonight, November 22, and the competition is down to its final four: teenage pop singer JoJo Siwa, basketball player Iman Shumpert, “The Talk” co-host Amanda Kloots, and Peloton instructor Cody Rigsby. So who will win the Mirror Ball Trophy at the end of the night? And who should win it? We’ve been asking our readers both questions throughout the week, and they came up with the same answer.

According to the combined predictions of Gold Derby users who have been placing their bets here in our predictions center, Siwa is still the favorite to take home the title with 7/10 odds. She also won our poll for who deserves to win the Mirror Ball Trophy with more than 43% of the vote. She made history as the first “DWTS” contestant to compete with a same-sex partner (Jenna Johnson), and she’s been our front-runner for most of the season on top of being the best celeb in the ballroom based on the judges’ scores.

But it’s not a done deal for Siwa by any means. Though it’s been smooth sailing for her for most of the competition, she shockingly landed in the bottom two on “Queen Night.” The judges voted unanimously to save her and eliminate Mike “The Miz” Mizanin, but it showed that her fan base might not be as reliable as we had thought. Meanwhile, Shumpert and Rigsby are the only contestants this season who were never in the bottom. Since the last two Mirror Ball champions — “Bachelorette” stars Hannah Brown and Kaitlyn Bristowe — were also never in jeopardy, that means we should watch out for an upset.

Shumpert is the likelier of the two men to usurp the throne. We rank him second with 11/4 odds of winning the competition, even though less than 18% of our poll respondents think he should win. He has already made history as the first basketball player to make it this far in the competition, and he has always been safe from elimination regardless of his scores, showing that his fans have his back. So maybe he’s the real Mirror Ball front-runner. What do you think?