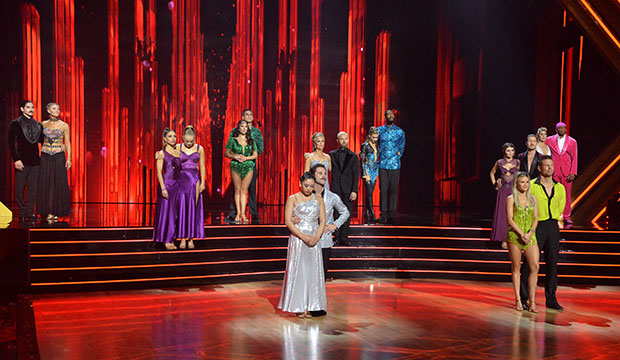 As Tyra Banks‘ announced on Monday’s “Dancing with the Stars” (when her mic wasn’t muted), next week is a double elimination. But that’s not the only one on the horizon.

The next two episodes — airing on Nov. 8 and Nov. 15 — will be double eliminations in order to get to a final four for the Nov. 22 finale. While ABC hasn’t officially announced the Season 30 finale date yet, a “Dancing” season typically wraps up the week of Thanksgiving and the Futon Critic lists the semifinal for Nov. 15 and finale for Nov. 22. Currently, there are eight couples left. Not hard to do the math here.

This also means there will be three double eliminations this season, following the one on Oct. 12 that saw Brian Austin Green and Sharna Burgess, and Matt James and Lindsay Arnold get bounced. The last time the show had this many was way back in 2009 when Season 9 boasted a 16-person cast. “Dancing” has had 15-person casts this season and last, but Season 29 only had one double elimination because Jeannie Mai withdrew the same night Chrishell Stause was eliminated. Season 29 also started one week earlier than Season 30 did, so it didn’t need another double elimination (both seasons will have 11 episodes, the usual count for “Dancing,” as Season 30 had a two-night Disney Week).

The eight remaining couples are Jimmie Allen and Emma Slater, Melora Hardin and Artem Chigvintsev, Olivia Jade and Val Chmerkovskiy, Suni Lee and Sasha Farber, Cody Rigsby and Cheryl Burke, Iman Shumpert and Daniella Karagach, and JoJo Siwa and Jenna Johnson. Get ready to say goodbye to half these names in two weeks.