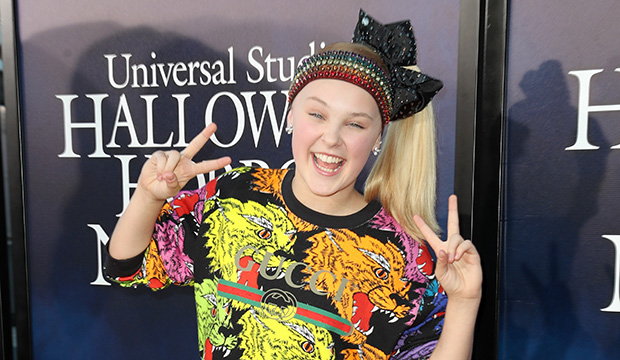 Call JoJo Siwa Tom Holland because she may have, probably, definitely spoiled the identity of her “Dancing with the Stars” partner. Celebrity-pro partnerships won’t be revealed until the live Season 30 premiere on Sept. 20, but the YouTuber slipped up in an interview with E!’s “Daily Pop” on Thursday.

Siwa, who will be part of the first same-sex couple in the show’s history, said that her girlfriend, Kylie Prew, joked about her getting too close to Jenna Johnson. “Before I went to the first rehearsal, Ky tells me, ‘Tell her, tell Jenna she needs to leave room for Jesus,'” Siwa said. “Entertainment Tonight” has also separately confirmed that Siwa is indeed paired with Johnson.

The pairing is a dream come true for Siwa, who said two weeks ago following her and Suni Lee‘s casting announcement, that she’d love to be partnered with Johnson, Lindsay Arnold or Britt Stewart. “There’s so many girls that are so amazing on this show that I would love to be paired with,” she said during the show’s Television Critics Association summer press tour panel. “I think Lindsay is awesome. Jenna is incredible. Britt is amazing. I think if I got one of those three, I would just be so happy.”

Johnson, Arnold, who missed last season due to pregnancy, and Stewart, who made her pro debut last year, are three of the 15 pros who’ll be competing on the milestone 30th season.

Siwa, who’s been on “Dance Moms” and “The Masked Singer,” said “Dancing” producers asked if she’d like a male partner or a female one, and she did not hesitate to pick the latter. The 18-year-old hopes her groundbreaking stint on the long-running series will break down doors for the LGBTQ community.

“It’s normal for a girl to dance with a guy and I think that’s really cool. But I think it’s really special that now not only do I get to share with the world that you get to love who you want to love, but also you get to dance with who you want to dance with,” she said. “There’s gonna be a lot of barriers we’re gonna have to break through. Who leads? How do you dress? What shoes do you wear? I think it’s all something that I’m looking forward to and doing something that’s never been done before. It’s gonna be tricky, but it’s gonna give so much to people out there — people of the LGBTQ community, everyone, people who just feel a little different. It’s gonna give them a sense of, ‘Wait a second, a girl can dance with a girl?’ Obviously why not? And I think that’s really special that I get to do that on this show.”

For her part, Johnson has done a better job of keeping her lips sealed about her celeb partner, though she’s probably used to it since she has to do it every season. The Season 26 champ did gush about her unnamed partner in a series of Instagram Stories on Monday. “My partner is just beyond. The energy that they bring into the room every day is infectious,” Johnson teased. “I’m having so much fun and I just can’t for all of you to find out who it is.”